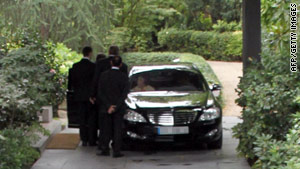 Liliane Bettencourt sits in a car outside her home in Neuilly-sur-Seine near Paris.
STORY HIGHLIGHTS
RELATED TOPICS

Investigators have been looking into Bettencourt's finances for weeks after allegations of secret, possibly illegal payments to French politicians, including President Nicolas Sarkozy.

The lawyer for Bettencourt, reported to be France's richest woman, asked the court last month to stop the retrieval of additional information on his client. A decision on his request is due in two weeks.

Bettencourt is at the center of several ongoing cases, including the one involving the alleged payments to politicians.

Her former bookkeeper, Claire Thibout, told police she received envelopes of cash that were to be given to Sarkozy and French Labor Minister Eric Woerth, who previously worked in the Budget Ministry and was in charge of reforms to France's retirement system.

Thibout said she withdrew the sums of money at the request of Bettencourt's financial adviser, Patrice de Maistre.

Police have questioned de Maistre several times about the allegations, which Sarkozy and Woerth have both denied.

The alleged payments came to light in secret recordings, purportedly made by Bettencourt's butler and revealed this summer, that also refer to a Bettencourt bank account in Switzerland containing 80 million euros ($98.3 million) which had not been reported on her taxes.

At the same time, Bettencourt's daughter went to court in June accusing a photographer of bilking her mother out of a billion euros. Bettencourt was friends with the photographer, Francois-Marie Banier, and allegedly gave him the money.

The daughter, however, claims her mother is not mentally competent to handle her own affairs and took the case to court to recover the funds.

Bettencourt has since cut Banier out of her will, her lawyer, Georges Kiejman, told CNN on Wednesday.

Banier had been the sole heir to Bettencourt's fortune, and no one has been added to the will in his place, Agence France-Presse reported, citing Kiejman.