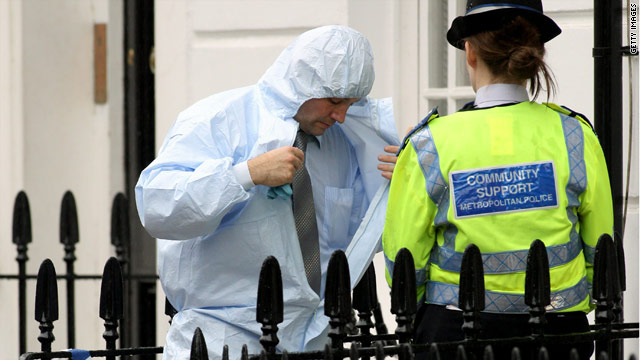 A police forensics officer leaves a central London home where the body of a missing man was discovered on August 25, 2010.
STORY HIGHLIGHTS
RELATED TOPICS

London, England (CNN) -- British police are investigating the death of a man reported by the British press to have worked for the country's secret service.

The man, Gareth Williams, 30, was found dead in an apartment in central London on Monday, after police forced their way in, the Metropolitan Police Service said.

He had not been seen "for some time," they said.

Police and the Foreign Office refused to comment on press reports that the man was a spy.

But British media reported that he worked for GCHQ, the country's intelligence agency for monitoring communications and keeping government data secret, and that he had been on loan to MI6, the foreign intelligence service.

Britain's Press Association and others said he was found stuffed in a large sports bag and left in the bathtub of his home.

Booth, 73, said she did not know the victim, PA reported.

An autopsy Wednesday failed to determine the cause of death, police said. More tests will be carried out, they added.

The Foreign Office said the incident is "a police matter," and added that it never confirms or denies that a person worked for the intelligence agencies.