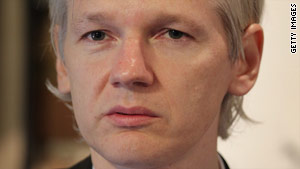 (CNN) -- Rumors that the Pentagon or CIA were somehow involved in the sex crime accusations against WikiLeaks founder and editor Julian Assange in Sweden are "complete nonsense," the attorney for the alleged victims said Tuesday.

Claes Borgstrom of the Swedish law firm Borgstrom and Bostrom said the two women he represents have nothing to do with any kind of conspiracy.

"What I can say is that those rumors that the Pentagon or the CIA are supposed to be involved lack all connection with reality," Borgstrom said from Stockholm, Sweden.

The women "have been subjected to sexual crimes, and the added pressure of the intense worldwide media interest has been very hard on them," he added.

A warrant issued Friday for Assange in Sweden listed charges of rape and molestation, but it was revoked less than a day later by Chief Prosecutor Eva Finne. Finne said Monday that she had not spoken to Assange.

Leif Silbersky, the lawyer representing Assange, said Tuesday that his client strongly denies all the accusations.

"His view is that he has not done anything that is morally and legally wrong," Silbersky said.

He also denounced the prosecutor who identified Assange to the media.

"Normally they should neither confirm nor deny the identity of a suspect, but in this case the prosecutor made two serious mistakes: The first was that she so quickly arrested Assange in his absence over a very serious crime without finding out all facts first. The second was that she confirmed his identity to the media. That, to me, almost constitutes a serious misconduct," Silbersky said.

The website founded by Assange, WikiLeaks, has triggered controversy by recently posting 76,000 U.S. documents related to the war in Afghanistan, a move that has drawn criticism from both the U.S. and Afghanistan. Another 15,000 documents are to be released soon, Assange has said.

He told the Arab-language television network Al-Jazeera on Sunday that the accusations are "clearly a smear campaign."

"The only question is, who was involved?" he asked.

He told the Swedish daily newspaper Aftonbladet in a story Sunday that he doesn't know who was behind it, "but we have been warned that, for example, the Pentagon is planning on using dirty tricks to destroy our work."

He said he was also warned about "sex traps." Asked by the paper whether he has fallen for one of those traps, he said, "Maybe. Maybe not."

Borgstrom said the two alleged victims contacted him over the weekend, and he met with them Monday. One is about 25 years old, and the other woman is about 35 years old, he said, but he did not want to give any more details about his clients for fear that they'll be identified.

"I also can't give any details of the events. Assange has not been heard yet, and giving out any details could interfere with the investigation," Borgstrom said.

"What I can say is that these are two Swedish women who have had two experiences completely independent of one another. They are not friends from before, but these events were connected with Assange's tour in Sweden."

Borgstrom says Assange's actions should be classified as at least sexual molestation.

"I understand why the prosecutor judged one incident as rape. My judgment is that the two women have been subjected to at least sexual molestation," he said, adding that there are still many questions about the incidents that need to be answered.

Assange told Aftonbladet that he had never, "either in Sweden nor in any other country, had sex with anyone in a way that was not based on both sides being completely voluntary."

Borgstrom also criticized the prosecutor for not questioning Assange immediately in the case.

"It is obvious that he is a suspect of sex crimes, and if he leaves the country, then we may never be able to hear his explanation," the attorney explained.

The fear that Assange might leave Sweden was apparently what provoked the warrant last week, according to a statement posted Monday on the Sweden Prosecution Authority's website.

The prosecutor "decided that Julian Assange was to be arrested," based on information that police gave her over the phone about the allegations -- a typical procedure, authorities said.

"The prosecutor was also made aware that the individual concerned was a foreign national and that he was about to leave the country," the chronology said. One reason for issuing the warrant was "that there was a risk that he would have time to leave the country before authorities had time to interrogate him. There was also a risk that he could have interfered with the investigation."

A group that claims to work to protect individuals' legal rights in the Swedish justice system said Monday that it has reported the on-call prosecutor to the Swedish Parliamentary Ombudsman of Justice. It was unclear what action, if any, the ombudsman could take against the prosecutor.

"We can see that, time after time, prosecutors don't follow the Swedish objectivity laws," said Johann Binninge, founder of the Organisation for Safe Legal Proceedings.

"When accusations come in, prosecutors don't even check facts before they take coercive measures, and this is contrary to Swedish laws. In this case, the prosecutor only listened to one individual's story but didn't bother checking the other side of the story before accusing Mr. Assange of a very serious crime. This is why we have reported her."

News of the warrant reached a Swedish media outlet, the prosecution authority said, but "the authority does not know how this happened, and the authority is not allowed to investigate this." Under Swedish law, news outlets are protected from police investigations into their sources.

However, she provided no details to the media, the authority said. "This is very important, especially in cases involving sex crimes, since information about the individuals involved must be protected. This is governed by Swedish privacy laws."

After the news broke in the media on Saturday, the on-call prosecutor "came under intense pressure" and it became clear the case needed to be transferred to someone else so that she could continue her usual duties, the prosecution authority said.

Finne was then appointed lead investigator and immediately began looking into the case, the authority said. She made the decision Saturday to revoke the warrant "because she did not consider it possible to suspect him of rape," the statement said. "The amount of information available to her was more extensive than what the on-call prosecutor had on Friday evening. Exactly what that information was cannot be disclosed at this point, since the investigation is ongoing."

Assange said the on-call prosecutor should be criticized, as well as the media "who so blindly reported these accusations."

Finne, however, said in a statement Monday, "My decision that Mr. Assange should no longer be arrested in his absence because he could not be suspected of rape is by no means criticism of the decision of the duty prosecutor. I had access to more information on Saturday than the duty prosecutor had on Friday."

Assange told Aftonbladet that he was at a friend's cottage in northern Sweden and had initially planned to stay until Wednesday but was delaying his departure for reasons unrelated to the investigation.

Swedish media, citing unnamed sources, reported that the two women reported the allegations to police, which led to the warrant. Aftonbladet said the older woman told the newspaper that the younger woman had approached her with a story similar to hers: that she had consensual sex with Assange but that the situation had turned abusive.

Karin Rosander, spokeswoman for the prosecution authority, would not confirm those reports.

Finne has "still not decided what other potential offenses [Assange] may be suspected of in the incident previously labeled rape," the prosecution authority's statement said. "She also has not yet decided on the suspected molestation. The investigation is still ongoing and the suspicions against Assange are still there."

CNN's Barbara Starr and Carol Cratty contributed to this report.