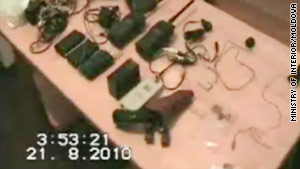 Officials arrested five people in connection with a raid in the city of Chisinau, Moldova.
STORY HIGHLIGHTS
RELATED TOPICS

Tipped off in early July, authorities discovered the Uranium 238, known as yellowcake, in a garage in the former Soviet republic's capital of Chisinau on July 20, said Kirill Motspan, director of the ministry's press office.

The smugglers were trying to traffic the uranium with an intent to sell it for more than $11 million. Authorities are still trying to determine the uranium's origin -- Moldova does not produce uranium -- and its intended destination.

However, yellowcake -- a coarse, poisonous powder that gets its name for its often yellow color -- cannot be used to make a nuclear bomb.

It is the most commonly occurring found form of uranium and is not a fissile substance, meaning that it must be enriched in an "elaborate set-up" before it can be used for nuclear weapons, said Xiachun He, a professor of nuclear physics at Georgia State University in the United States.

The uranium 238 alone is not even potent enough to make an effective dirty bomb, the physicist said, since the level of radiation would be too low once scattered as dust.

Motpan said it was his understanding that 1 kilo of uranium costs $6.3 million on the black market and that is what the smugglers were expecting to get.

"Apparently, you can't make anything serious out of this modest amount of radioactive material," Motpan said. "But they were actively looking for a customer."

Acting as buyers, undercover policemen acquired less than one gram of the substance and sent it to the United States for analysis, which confirmed that it was uranium 238, he said.

Motpan also said that along with the uranium, the Moldovan police also discovered a cache with a Makarov pistol, 620 cartridges for a Kalashnikov assault rifle, an F-1 hand grenade, car license plates, Soviet passports, and other documents in the same garage.

Yellowcake became a frequently heard term just before the 2003 invasion of Iraq. The United States and the United Kingdom asserted that Iraqi dictator Saddam Hussein had been trying to procure yellowcake from Niger to make weapons of mass destruction.

Then-President George W. Bush used that claim to bolster support for the war though critics, including diplomat Joseph Wilson, who had published an article about a CIA investigation, said Bush was exaggerating the Iraqi threat.

Motpan said a German atomic center will perform an expert analysis of the seized uranium to establish the enrichment percentage and the country of origin. The radioactive material has been placed in a special container and is under guard.

"We are expecting more information coming out of Russia, Romania and some other countries that can shed light onto this case and those suspects," he said.

CNN's Mila Sanina and Max Tkachenko contributed to this report.