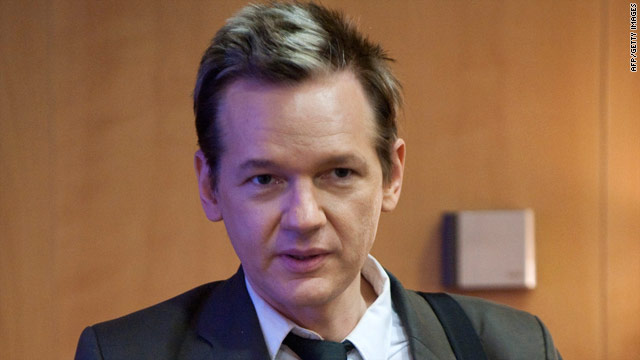 Stockholm, Sweden (CNN) -- WikiLeaks founder and editor Julian Assange said Swedish authorities reached "the height of irresponsibility" by issuing an arrest warrant alleging rape against him, then revoking it less than a day later.

"It is clearly a smear campaign," Assange told Arabic news network Al-Jazeera in a live telephone interview Sunday. "... The only question is, who was involved?"

Asked who he thinks was behind the accusations, Assange told the network, "We have some suspicions about who would benefit, but without direct evidence, I would not be willing to make a direct allegation."

Meanwhile, the Swedish Prosecution Authority said in an update on its website that Assange's name was leaked to the media, and the authority -- which does not normally publish the names of suspects -- "did not in this case initiate publication."

However, the office did confirm Assange's identity and later published his name in statements about his arrest and the subsequent revocation.

An arrest warrant was filed against Assange in absentia on Friday. Swedish media, citing unnamed sources, reported that two women, ages 20 and 30, reported the allegations to police, leading to the warrant being filed. The AftonBladet, a respected Swedish daily, said the 30-year-old told the newspaper that the younger woman had approached her with a story similar to hers -- that she had consensual sex with Assange but that the situation had turned abusive. Karin Rosander, a spokeswoman for the prosecutor's office, would not confirm the reports.

But on Saturday, less than full day later, Chief Prosecutor Eva Finne said in a statement posted on the authority's website that Assange was "no longer wanted" and "is not suspected of rape."

The prosecution authority said on its website Sunday, "When Ms. Finne became in charge of the matter on Saturday, she had more information than the first prosecutor had on Friday night. Decisions on coercive measures, like arrest, should constantly be re-evaluated during an investigation and must always be based on the actual information."

"The decision to appoint Eva Finne as prosecutor in charge was made on Saturday," the authority said. "Under most circumstances the duty prosecutors on Monday morning hand over all weekend matters to different prosecutors who will be in fully in charge of the investigations."

However, serious crimes or high-profile matters can be handed over earlier to lessen the burden on the duty prosecutors, the posting said. "The matter concerning Mr. Assange was judged as such a matter."

Rosander told CNN affiliate TV4 that the decision to issue the warrant was made by an "on-call prosecutor" and that Finne revoked the warrant on Saturday. Such differences in prosecutorial judgment are common in Sweden, she said.

The arrest warrant also mentioned a molestation charge, but molestation -- which is not limited to child victims in Sweden -- is not a crime punishable by jail time. Rosander told TV4 Assange is still under investigation for molestation.

Asked about that investigation by Al-Jazeera, Assange -- who said he is on holiday in the north of Sweden -- said, "I have no details on what that is about. I cannot imagine any event where that would be credible."

He said he has not been contacted by Swedish police, but has directed his attorney to contact them.

Assange told the network he was warned of an impending smear campaign.

In a posting Saturday on the WikiLeaks Twitter page, Assange said, "the charges are without basis and their issue at this moment is deeply disturbing."

Asked if he had anything to tell Swedish authorities, Assange said he would ask that they be cautious "and not issue statements and retract them six hours later" given the seriousness of the situation.

Finne, the posting Sunday said, "will work with the investigation" next week. "At the moment, it is not possible to estimate when more information can be given or which decisions will be made."

WikiLeaks has triggered controversy by recently posting some 76,000 U.S. documents related to the war in Afghanistan.

An elusive figure, Assange reportedly lives part-time in Sweden. He told the Swedish newspaper Svenska Dagbladet last week that he had been in Sweden because he wanted a safe-place to go after the high-profile document leak -- which has been called the biggest leak since the Pentagon Papers about the Vietnam War.

U.S. Defense Secretary Robert Gates criticized the leak, saying it would have a significant negative impact on troops and allies, revealing techniques and procedures. And Afghan President Hamid Karzai has expressed concern that the leaks will put informants' lives at risk.

Asked Sunday by Al-Jazeera about Karzai's comment that he has blood on his hands, Assange said it was "extraordinary thing to hear, a comment like that, from a man like that, who has waded his whole life in blood." He pointed out that the Pentagon has said it was not aware of anyone coming to harm because of the documents' release.

Another 15,000 documents are being reviewed and will be released soon, Assange said.