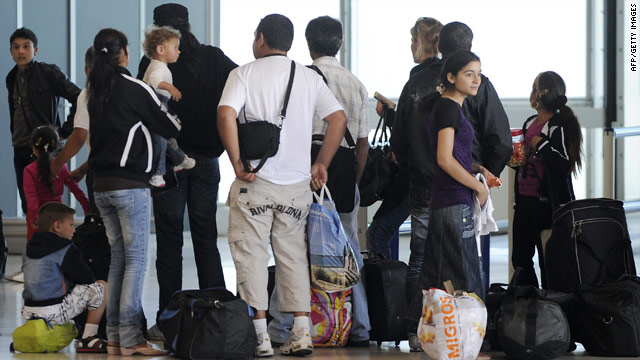 People belonging to the Roma community wait to board a flight at Lyon airport on Thursday.
STORY HIGHLIGHTS

Paris, France (CNN) -- France began the controversial expulsion of Roma on Thursday, putting 79 of them on a charter flight out of the country, the spokesman for the French minister of immigration said.

The government did not confirm the destination of the flight, but the head of a Roma support group, French media, and the Romanian Foreign Ministry said the plane was heading for Bucharest, Romania.

Backgrounder: Who are the Roma?

Some Roma already flew out of France in the morning on a commercial flight to Bucharest, according to a spokesman for ROMEUROPE, a support group for Roma in Europe. The Romanian Foreign Ministry said there were 14 people on the earlier flight, for a total of 93 being expelled Thursday.

The deportation is part of what the French government says is a crackdown on illegal immigration, and it follows the government's dismantling in the past three weeks of 51 Roma camps that it called illegal.

Video: France's gypsy crackdown
I am worried about the risks of populism and xenophobic reactions in a context of economic crisis.
--Romanian Foreign Minister Teodor Baconschi
RELATED TOPICS

Roma are a group of people marked by poverty who live mainly in southern and eastern Europe. Often referred to as Gypsies, they tend to live in camps or caravans and have been persecuted throughout history.

"I am worried about the risks of populism and xenophobic reactions in a context of economic crisis," Baconschi said.

Roma from Romania and Bulgaria are allowed free passage into France if they are European Union citizens. After that, however, they must find work, start studies, or find some other way of becoming established in France or else risk deportation.

The French government said those Roma being expelled this week have overstayed the three-month limit.

Two more charter flights were scheduled to leave in the next two days, the French Ministry of Immigration said. Friday's flight will have about 100 Roma aboard, a spokesman there said.

The vice president of France's Human Rights League, Malik Salemkour, told CNN the expulsion is pointless because the there are no provisions for those being sent away.

"Those that still have a house there can go back to it, but a lot of them do not have any shelter in Bulgaria or in Romania, so they are just stranded in Bulgaria or Bucharest for several days," said Salemkour, who is also head of ROMEUROPE.

He said the Roma will only return to France in the coming days because that's where they have set up their lives.

"Their children are at school here. They want to work here. It's been five, seven, 10 years that they have been living here. And though there have been obstacles, they are going to stay. And it's not fancy policies that are going to solve the problem," he said.

Two Romanian secretaries of state plan to be in Paris on August 30 to discuss the integration of Roma populations, the French Foreign Ministry said. It said Paris favors the social integration of the Roma in Romania.