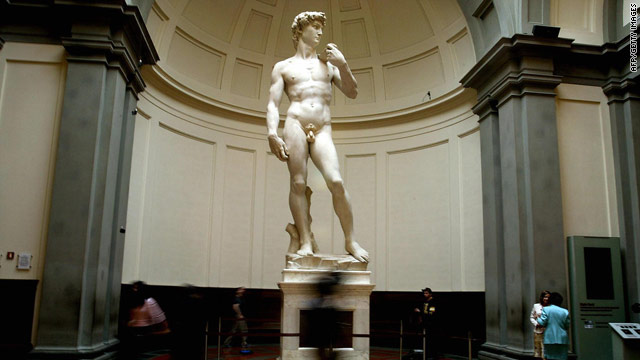 Rome, Italy (CNN) -- The city of Florence and the Italian government are embroiled in a dispute -- again -- over who owns one of the world's most famous statues, Michelangelo's David.

The issue has been simmering for years. The Florence mayor's office said the debate began in the early 1990, and the city's various mayors have brought it up from time to time.

It's mainly about the bottom line -- some 8 million euros a year in ticket sales at Florence's La Galleria dell'Accademia, also simply known as L'Accademia or the Accademia Gallery, where David is displayed. That money, however, goes to the Italian government, and not the city.

Florence Mayor Matteo Renzi recently asked that David's earnings go to Florence instead, because "after all, the David is ours,"' said one of his press officers.

The city of Florence has the right to partake in the profits.
--Eugenio Giani, president of the Florence City Council
RELATED TOPICS

While tourism brings money to Florence, it also brings a lot of costs, such as cleaning and security, said the press officer. The mayor does not feel it's fair that the burden of maintaining the city and its centuries-old buildings should fall solely on its citizens.

Following the request, the Heritage Ministry commissioned a study to determine who is the rightful owner of David.

The ministry's lawyers recently concluded that according to documents they found in archives, David belongs to Italy, not the city of Florence.

The government bases that assumption on the fact that Italy paid for David to be moved from its original spot, in central Florence's Palazzo Vecchio, to L'Accademia, according to Renzi's press officer.

Eugenio Giani, president of the Florence City Council, said in a statement Monday that "the opinion of the Roman lawyers is very dangerous," noting all of the city's "heritage" that fills state museums.

He points out that Florence's city hall commissioned and paid for the statue's creation in the 16th Century. It stood at the Palazzo Vecchio for nearly four centuries, until 1873, when it was moved to L'Accademia in order to better preserve it.

When Italy was unified in 1871, the Palazzo Vecchio was returned to Florence under law, he said. Giani said his records show the new Rome-based Italian government paid to move David because it took the responsibility of "tutelage" over the new nation's heritage.

"The state did not for sure want to lay claim to the ownership of the David given two years' prior law," he said. "Instead, it wanted to carry out a tutelage function, which is part of its competence to this day and by which the city of Florence had agreed to place the David at the Accademia."

Many of the paintings and statues in Italian-run Florence museums such as the Uffizzi Gallery belong to the city, Giani said. Some of the proceeds should be given to Florence, he said: "The city of Florence has the right to partake in the profits."

Michelangelo, who was a native of Florence, completed the sculpture in 1504. It has been a symbol of Florence's defiance against its enemies ever since.

Renzi told the Florence daily newspaper Il Corriere Fiorentino "with all due respect to the Roman lawyers, the incontestable documents held in possession by the state administration are clear: the David belongs to the city of Florence."

The Italian Heritage Ministry's Sandro Bondi indicated in a statement Monday he is not ready to hand over ownership of the statue.

Bondi said he found himself embroiled in "an absurd and inopportune" dispute about the statue "against (his) will." His statement referred to the question of the statue's ownership as "a petty matter" -- but one that also should "be addressed in a sharing, planning manner." He said he would work with Florence representatives in such a manner, with a goal of avoiding controversy.