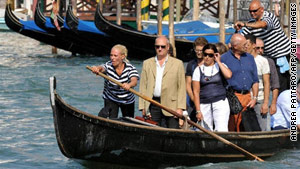 Giorgia Boscolo can become a gondolier after applying for her full license.
STORY HIGHLIGHTS
RELATED TOPICS

(CNN) -- Giorgia Boscolo spent hundreds of hours on the canals in Venice, Italy, learning the intricate waterways and how to handle and steer a distinctive banana-shaped boat, according to Italy's ANSA news agency.

Her effort paid off.

This week, Boscolo passed her final exam and is likely to become Venice's first female gondolier, the ANSA agency said, after she applies for her full license.

Boscolo, 24, said she inherited her love for navigating the canals from her gondolier father, reported ANSA.

The ancient profession used to be passed from father to son, making the group of Venetian gondoliers distinctly male. But now there are courses.

"I'm so happy for Giorgia and in a little way share her joy because it was under my presidency that the first woman was admitted to the gondolier's course," Aldo Rosso, former head of the city's gondola group, told ANSA.

The agency added two other women enrolled in the course, but did not pass the exam.

Male gondoliers have often questioned whether women would be strong enough to control the large boats, but Boscolo dismissed her critics.

"Childbirth is much more difficult," ANSA reported she said.