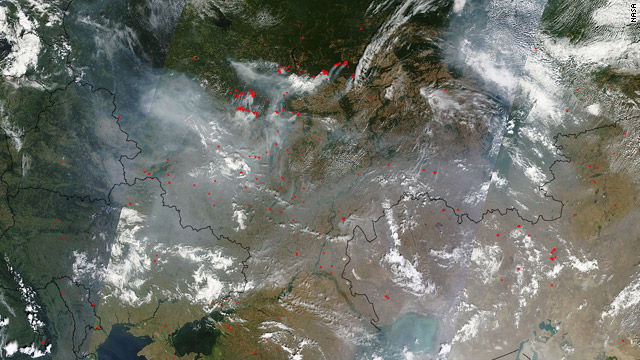 State media reported that the images showed 368 hot spots across Russia on Saturday. RIA Novosti quoted a spokeswoman for ScanEx, which analyzes the images, as saying that central Russia's Moscow, Ryazan and Nizhny Novgorod regions are the most affected.

Smoke clouds, which have become a serious health hazard, can clearly been seen on the satellite images, blanketing large swaths of the country.

State media reported that carbon monoxide levels in Moscow were more than six times the maximum allowable concentration, and other toxic substances permeated the city air at nine times the normal level.

The disaster has killed more than 50 people and left dozens hospitalized, according to Russia's health and social development ministry.

Meanwhile, Russia thanked the United States for coming to its aid.

"Russia is grateful to the United States over the assistance in tackling the wildfires raging across the country," said the Russian Foreign Ministry, according to news reports.

The United States sent some $4.5 million in aid that included water tanks, pumps, hand tools, fire-protective clothing and medical kits, according to the U.S. State Department.

RIA Novosti reported that thousands of Russian emergency workers and military personnel have been working around the clock for almost three weeks to fight the fires in 22 regions, which have so far left more than 3,500 homeless.