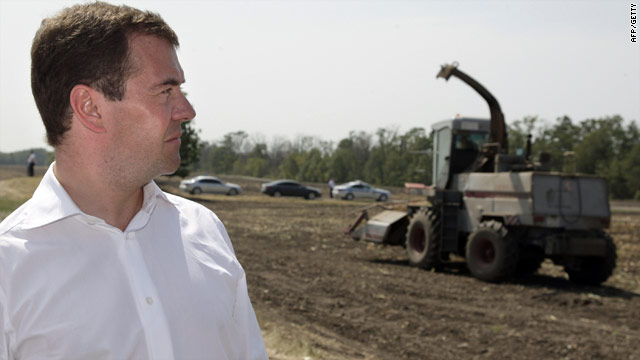 Moscow, Russia (CNN) -- A quarter of Russian crops have been lost in the recent drought, leaving many farms on the brink of bankruptcy, Russian President Dmitry Medvedev said Thursday.

The government should prevent increases in the price of grain and fodder, which will eventually affect the prices of food products like flour, bread, meat, and milk, Medvedev said at a government agriculture meeting in the southern Russian region of Rostov.

"Right now, everybody is of course thinking about it -- farmers as well as officials responsible for agriculture," Medvedev said in comments broadcast on Russian state television. "But we also understand that regular people, too, are thinking about what will happen after this extremely tough summer, how it will affect the prices on staples food."

He said government authorities should closely monitor food prices on a daily basis, "otherwise there will always be someone who would want to capitalize on this situation. There are such cases already."

Large parts of Russia have suffered this summer from excessive heat, drought, and a spate of wildfires that have also created stifling smoke and smog. Hundreds have died in the combined disasters.

Alexander Frolov, who heads the Russian meteorological service Roshydromet, said this week that virtually no rain is forecast in Russia this month.

The situation is so bad in some regions that there is "no reason" to start planting winter crops, Frolov said.

Roshydromet forecasts a 30 percent drop in Russia's harvests due to the drought, he said.

Russian Prime Minister Vladimir Putin has already announced a ban on grain exports that will begin August 15 and could last until December 31, based on uncertainty over this year's farm production.

Some regions won't be sowing winter grain at all this year, he said.

Thursday, Medvedev lifted the state of emergency in three of seven Russian regions most affected by wildfires. The Emergency Situations Ministry said the number of areas covered by the fires has decreased 25 percent in the past day.

The fires burning in the remaining four regions of western and central Russia are still intense, however, with tens of thousands of firefighters deployed there.