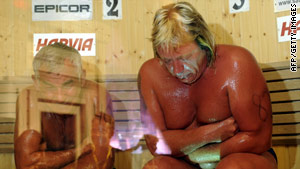 (CNN) -- A competitor has died and another is in hospital following a tragic end to the World Sauna Championships in southern Finland.

Russian Vladimir Ladyzhenskiy died Saturday after taking part in the final of a competition in which contestants are required to withstand rising temperatures for as long as possible.

Finnish finalist Timo Kaukonen was also taken to hospital for treatment, organizer Ossi Arvela said in a statement posted on the event's website.

Images of the contest showed Ladyzhenskiy and Kaukonen sitting side by side in the sauna. Both contestants can then be seen lying on the ground, apparently doused in water. Ladyzhenskiy appears to be suffering from severe skin burns.

"The event was interrupted immediately after the accident. Competition organization grieves these sad events," Avela said.

Finnish police and organizers are investigating the incident, Arvela said. But he said first aid personnel had been in place and all competitors taking part in the contest had provided doctor's certificates. "All the rules were followed," he said.

The World Sauna Championships take place annually in the town of Heinola.