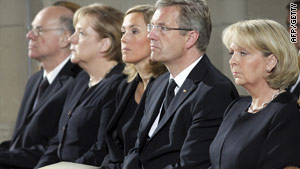 Duisburg, Germany (CNN) -- As Germany paused Saturday to honor those who died at a German music festival last week, the pastor leading a memorial service sought to comfort those who lost loved ones, telling them "love is stronger than death."

Pastor Nikolaus Schneider spoke at the memorial at the Salvator Church in Duisburg. The church was the center of observances in the northern German town.

Thousands of people came for the service, which was intended to honor the 21 people who died and more than 500 people who were injured at the Love Parade music festival on July 24.

Schneider told mourners that they should not sacrifice their trust in God or their zest for life as even the "the Love Parade became a dance of death."

Hannelore Kraft, the prime minister of North Rhine-Westphalia, cried audibly during the service. She spoke at length afterwards, promising a full investigation into the incident.

She also had a message for those who lost loved ones, telling them to "open your hearts to those who want to give you comfort" and assuring them "you are not alone."

The service was broadcast at 14 other churches in town and at the local soccer arena, where about 1,000 people turned out to watch.

German Chancellor Angela Merkel and President Christian Wulff both cut short their holidays to be at the service. Duisburg Mayor Adolf Sauerland was not there, however, after reports he had received death threats for allowing the Love Parade festival to take place in the city.

The day began with a candle procession from the scene of the tragedy to Salvator Church and the arena. The church can accommodate about 500 people, and the seats were reserved mainly for relatives of the victims.

Joachim Mueller-Lange, the vicar responsible for emergency spiritual healing, said all the families of those killed had been invited, including some who live abroad. Some families did not attend because burials were being held Saturday, while others declined because they wished for something more private, he said.

A remembrance ceremony was also held at the Duisburg synagogue.

The fatal crush happened July 24 in an underpass between the main event site and an expansion area.

Witnesses told CNN affiliate NTV that people pushed into the tunnel from both sides until it was dangerously overcrowded. People were crushed against the walls and one another, losing consciousness and creating panic.

Police cordoned off the underpass Saturday to prevent a similar scene among mourners who may go to pay their respects.

Merkel has called for a thorough investigation into the incident and said she was "horrified and saddened" by the tragedy.

Some 1.4 million people had shown up at the popular festival, which featured dozens of DJs spinning techno music for hours, Carsten Leub of NTV said.

Organizers had expected only 700,000 to 800,000 attendees, so they opened an additional event site to accommodate more people.

Police are investigating the cause of the back-up in the underpass.