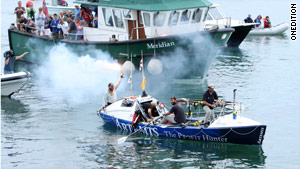 The crew celebrates as it approaches the Isles of Scilly after spending 43 days on the ocean.

London, England (CNN) -- Proving that records are meant to be broken, even after 114 years, a British-led rowing team Saturday won bragging rights for crossing the North Atlantic.

The four men, who left New York City on June 17, completed their journey at St. Mary's Harbour on the Isles of Scilly after rowing, rowing, rowing and more rowing for almost 44 days, the Ocean Rowing Society International reported.

The Artemis Ocean Racing team, led by Leven Brown, finished in 43 days, 21 hours, 26 minutes and 48 seconds, knocking more than 11 days off the 55-day record set by a pair of Norwegians in 1896, according to the UK Press Association.

Dozens of people lined up at the dock and crowded on to boats in the harbor to witness the team's arrival.

Other members of the crew are Ray Carroll of Ireland, Don Lennox of Britain and Livar Nysted of Faroe Islands.

"The funniest thing for me was walking up the quayside -- after more than six weeks of not walking, my legs felt more than a bit unsteady," Brown, 37, of Edinburgh, Scotland, told the BBC.