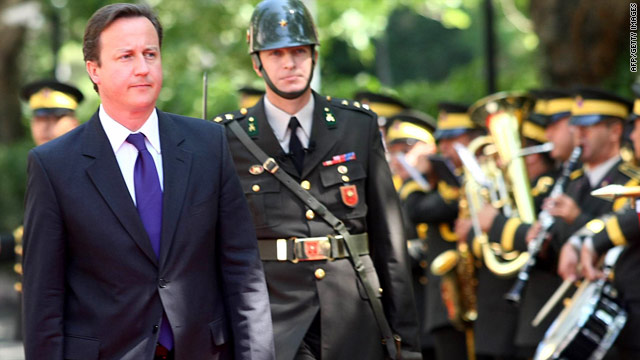 Cameron made the remarks in the Turkish capital of Ankara, which he was visiting to forge a new relationship with Turkey and show his support for Turkish membership in the European Union.

"Let me also be clear that the situation in Gaza has to change. Humanitarian goods and people must flow in both directions. Gaza cannot and must not be allowed to remain a prison camp," Cameron said, according to a transcript of the speech provided by his office.

Residents of Gaza say they have suffered greatly under an Israeli goods blockade implemented since Hamas took control of the territory after elections in 2006. But Israel says its tough measures are necessary to stop weapons from reaching Hamas militants intent on destroying Israel.

Ron Prosor, Israel's ambassador to Britain, reacted quickly to the prime minister's remark, saying that Hamas is responsible for the misery in Gaza.

"The people of Gaza are the prisoners of the terrorist organization Hamas," Prosor said in a statement. "The situation in Gaza is the direct result of Hamas' rule and priorities."

The ambassador also raised the issue of Gilad Shalit, the Israeli soldier taken hostage four years ago who is being held in Gaza.

"We know that the prime minister would also share our grave concerns about our own prisoner in the Gaza Strip, Gilad Shalit, who has been held hostage there for over four years, without receiving a single Red Cross visit," Prosor said.

Cameron's comments came in a country that once had close relations with Israel, but ties between the two nations have been strained recently over the Jewish state's policies toward the Palestinian territory.

Turkey was incensed at the May 31 Israeli commando raid against an aid flotilla in the Mediterranean Sea. Violence broke out on one of the ships in the flotilla, the Turkish Mavi Marmara, leaving nine activists -- eight Turks and a Turkish-American dual national -- dead.

Cameron -- who touted Turkey's unique ability to make peace between Israel and the Arab world -- stressed that the Israeli action was "completely unacceptable." He said he told Israeli Prime Minister Benjamin Netanyahu that Britain expects Israel's inquiry into the raid to be "swift, transparent and rigorous."

He was also optimistic that the recently frayed alliance can continue to be friendly.

"Just as Turkey is playing a pivotal role in Afghanistan, it can also do so in the Middle East. Turkey's relationships in the region, both with Israel and the Arab world, are of incalculable value. No other country has the same potential to build understanding between Israel and the Arab world. I know that Gaza has led to real strains in Turkey's relationship with Israel, but Turkey is a friend of Israel, and I urge Turkey, and Israel, not to give up on that friendship," Cameron said.

He also believes Turkey can also help bring together Palestinians and Israelis as they work to meet in direct negotations.

"But as, hopefully, we move in the coming weeks to direct talks between Israel and the Palestinians, so it is Turkey that can make the case for peace and Turkey that can help press the parties to come together and point the way to a just and viable solution," the prime minister said.