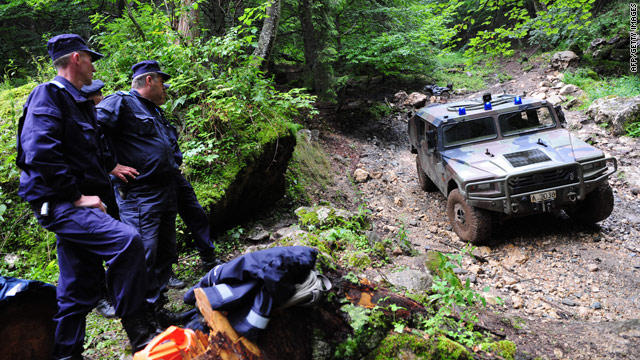 Romanian gendarmes secure the area on the Bucegi mountains on July 27, 2010 where a Israeli helicopter crashed on the 26th.
STORY HIGHLIGHTS
RELATED TOPICS

(CNN) -- Seven people, including six Israelis, are feared dead after an Israeli helicopter crashed in Romania on Monday during a joint military exercise, the Romanian Defense ministry said.

About 5:45 p.m. (10:45 a.m. ET), teams found the wreckage of the helicopter in the Fundata-Zarnesti area, near Brasov in central Romania, the defense ministry said. "So far, the circumstances of the accident and the crew situation remain unknown."

Defense Minister Gabriel Oprea has ordered a commission to the site to investigate the crash, the ministry said.

Israel Defense Forces said the aircraft was carrying four pilots, two mechanics and a member of the Romanian Air Force. The Israeli air force is sending medical, rescue and investigative teams to the scene, a military statement said.

The crash site was in a remote area at an altitude of more than 2,000 meters (about 6,560 feet) in the mountains, according to the defense ministry. Fog was preventing helicopters from flying to the site Monday night. Authorities said six ambulances were waiting a few kilometers away.

The exercises, scheduled from July 18 through Thursday, are aimed at training low-altitude aircraft crews in search-and-rescue operations and medical evacuations, according to the statement.

A CH-53 helicopter made an emergency landing July 18 after experiencing technical problems, the defense ministry said. The problem was fixed, and it took off and landed safely.