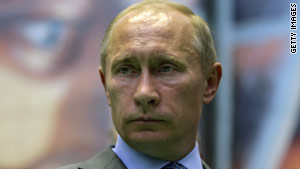 (CNN) -- During a recent meeting, Russian Prime Minister Vladimir Putin provided encouragement and sang patriotic songs with 10 agents who were expelled from the United States this month after they were accused of spying, state media reported.

Putin, a former KGB officer, said that betrayal allowed the spy network to be uncovered, adding that he knew the names of those responsible, RIA-Novosti reported.

Betrayers "always end up badly taking to drink or drugs, in a gutter," he said, according to the news agency.

The 10 Russian agents pleaded guilty in the United States earlier this month for failing to register as foreign agents and were ordered out of the country.

In Washington, Attorney General Eric Holder said none of the 10 had passed classified information and therefore none had been charged with espionage. But U.S. officials said the group had been under observation by federal authorities for more than a decade.

After the pleas, the agents were ordered out of the country and the United States and Russia completed an elaborately choreographed spy swap, using chartered planes to exchange the 10 agents convicted in the U.S. with four Russians who had been imprisoned for alleged contact with Western intelligence agencies.

Putin told reporters Saturday that the life of a spy is difficult.

"Imagine - they have to master a foreign language as your own, think and speak it, fulfill tasks in the interests of their motherland for many years without counting on diplomatic immunity," he said.