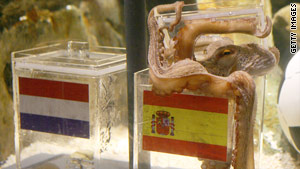 (CNN) -- A Russian bookmaking company is offering to pay 100,000 euros for Paul, the prognosticating octopus who correctly predicted Spain's win in the World Cup.

Paul currently lives at the Sea Life Center in Oberhausen, Germany. Zhuravsky said a representative of the center's public relations firm has told him the offer has been received and "they are studying it."

However, the firm, Dederichs Reinecke and Parner, said it declined the Russian offer and that Paul will not be sold to anyone.

"Seriously speaking, we want the octopus for a number of purposes," Zhuravsky said. "First, to see whether he can indeed effectively forecast the results of the football games. Secondly, Paul could become a good mascot, a good symbol for my bookmaking companies. And thirdly, he has an international fame like perhaps no other animal across the world does these days, and I'd love to be able to move him to Russia.

"Both kids and adults, I'm sure, would love to see him here," he said. "We are even prepared to put him in the Moscow City Aquarium if that were the condition."

He said Paul would be given "the best food" and officials would let him forecast the results of the Russian domestic football tournament, "which, I think, is a more difficult task than predicting the World Cup," he said. "This would also boost the profile of the Moscow Aquarium."

"They said they'll respond to our offer this week," said Zhuravsky, who is also president of the Russian Association of Bookmakers. "They didn't tell us that they're not selling the octopus."

Last week, the Madrid, Spain, aquarium said it was making the "necessary arrangements" for Paul's transfer to Spain but had offered to beat any offer already on the table.

Paul not only predicted Spain's win over the Netherlands in the final but also the team's semifinal success against Germany. Prior to that, the cephalopod correctly predicted all five of Germany's earlier results, and picked Germany to beat Uruguay in the third-place playoff, ending the tournament with a remarkable eight-for-eight record.

For each prediction, two mussel-filled acrylic boxes labeled with a team's flag were lowered into Paul's tank. Whichever box he chose conveyed the winning team.

Sea Life staff have announced Paul is retiring from the predictions game, but previously said they were considering a "host of offers from around the globe." Public relations guru Max Clifford told CNN that Paul could become the world's first multimillionaire octopus if his handlers choose to cash in on his global fame.

CNN's Maxim Tkachenko and Lianne Turner contributed to this report.