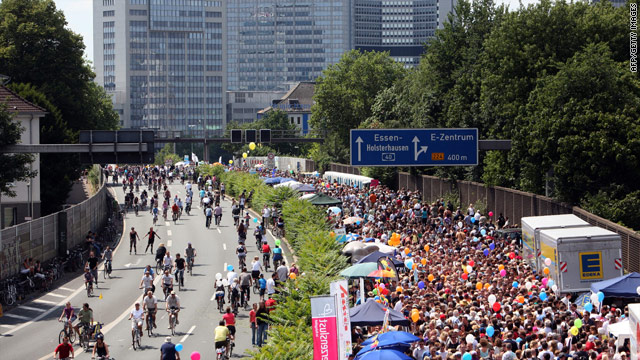 People walk and cycle along the A40 autobahn near Essen, here 20,000 picnic tables were lined up end-to-end.
STORY HIGHLIGHTS
RELATED TOPICS

(CNN) -- Germans turned a 60-kilometer stretch of highway into a performance art venue Saturday as part of the celebrations for the annual European City of Culture event.

Organizers lined one lane of the A40 highway -- one of Germany's busiest -- with 20,000 tables and offered space at them to anyone who wanted to perform.

Performances could take any form, the organizers said, as long as they showcased local culture.

Audiences were allowed to travel along the other lane by any non-motorized means.

The festival centered on the city of Ruhr in western Germany.