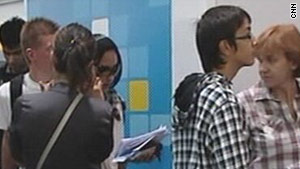 London, England (CNN) -- Thousands of vacationers were left stranded Saturday in Greece and Turkey after the financial collapse of a British tour operator.

Budget holiday company Goldtrail Travel announced on its website that it had ceased trading Friday night.

The shutdown affects the travel plans of 16,000 people -- both in Britain, waiting to take holidays with Goldtrail, and abroad, said Jonathan Nicholson, a spokesman for Britain's Civil Aviation Authority (CAA).

Nicholson said all passengers were being accommodated on other flights.

Goldtrail operated flights and holiday packages from many British airports to Turkey and Greece. It sold mainly through travel agents, the CAA said.

The company was a member of ATOL (Air Travel Organizer's Licensing), a CAA program that protects travelers from losing their money on disrupted travel or being stranded abroad. If an ATOL-protected tour operator goes out of business, the CAA ensures customers will get their money back and will arrange to fly them back home.

It was little consolation to British traveler Aslam Kayoon, who planned to travel with his wife and three children to Bodrum, Turkey, with Goldtrail on Saturday.

They were feeling "really sad. Especially the kids. Kids are really depressed. They were looking forward to this holiday. They did their homework, everything -- they got everything in order. I don't know how I'm going to tell them," Kayoon told CNN affiliate ITN at London's Gatwick Airport.

A group of four friends described their disappointment, especially because it was difficult for them to get time off together.

Another man said he was "devastated" his vacation plans were ruined.

CNN's Bharati Naik and Melissa Gray contributed to this report.