Rash of drownings as Russians attempt to escape heat 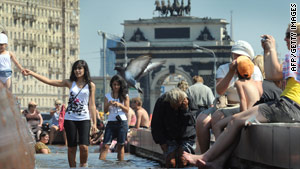 Moscow, Russia (CNN) -- More than 1,000 Russians have drowned recently as they attempted to find relief from a stifling heat wave -- many of them after drinking alcohol, officials said.

Vadim Seryogin, a department head at Russia's Emergencies Ministry, told reporters Wednesday that 49 people, including two children, had drowned in the last day. More than 1,200 total have drowned, 223 of them between July 5 and July 12.

"The majority of those drowned were drunk," Seryogin said. "The children died because adults simply did not look after them."

A heat wave settled over Russia in mid-June, according to the state-run RIA-Novosti news agency. The region has experienced record-breaking heat, with temperatures of up to 40 degrees Celsius (104 degrees Fahrenheit).

The heat has caused an emergency situation in Russia, according to a column on RIA-Novosti.

Officials have urged citizens to take a siesta in the afternoon to avoid the hottest part of the day. Cases of heat stroke and sunburn have increased in children, and adults with heart problems and diabetes are suffering complications.

Asphalt softened in the heat has been blamed for traffic accidents. A state of emergency has been declared in 14 regions, and some areas are facing water shortages as wells dry up.

The heat has exacerbated a smog problem, as well, the RIA-Novosti column said, adding Russia has not experienced such heat in 130 years. Winter and spring crops are withering under the heat, the column said.