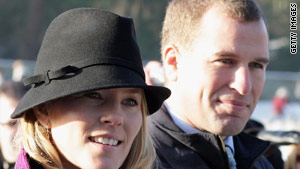 Peter Phillips, the 11th in line to the throne, with his Canadian-born wife, Autumn.
STORY HIGHLIGHTS
RELATED TOPICS

London, England (CNN) -- Britain's Queen Elizabeth II is "delighted" that she will become a great-grandmother for the first time, Buckingham Palace said Friday.

Peter Phillips, the 11th in line to the throne, is expecting a baby with his Canadian-born wife, Autumn, later this year, the palace said.

"Peter and Autumn Phillips are delighted to confirm they are expecting a baby in December," the palace said in a statement.

"The queen and the duke of Edinburgh, as well as Autumn's family, have been informed and are delighted with the news."

Peter Phillips, 32, is the son of the Princess Anne, the second child and only daughter of the queen. He brought the queen another first in May 2008 when he married Autumn Kelly at Windsor Castle, becoming the first of the queen's grandchildren to wed.

Peter and his younger sister Zara Phillips have no royal titles and perform no royal duties. They are the cousins of Princes William and Harry, the second and third in line to the throne, respectively.