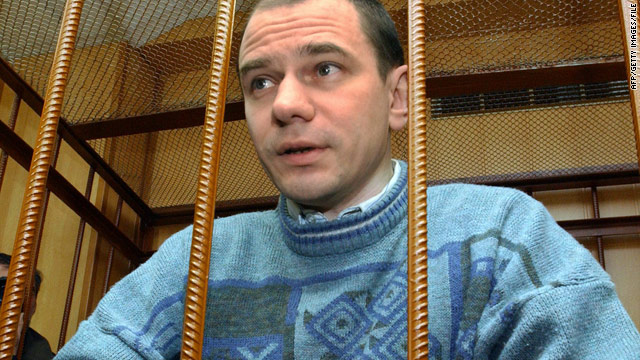 Igor Sutyagin is shown in a Moscow court in 2004.
STORY HIGHLIGHTS

Moscow, Russia (CNN) -- A Russian researcher convicted of spying for U.S. intelligence services could soon be part of an exchange for suspects in a recent Russian spy scandal in the United States, his mother and brother told CNN Wednesday.

Svetlana Sutyagina confirmed to CNN that her son, Igor Sutyagin, said he will be released from jail and sent to London, England, by way of Vienna, Austria, on Thursday.

According to Svetlana Sutyagina, her son was on a list of 11 names submitted by the United States for the exchange of the Russians detained in the United States in an alleged spy ring. She said her son remembers just one other name on this list -- Sergei Skripal, a former Russian military intelligence officer sentenced for spying.

Igor Sutyagin was convicted in 2004 of passing secret data to members of U.S. intelligence services acting as employees of a British company called Alternative Futures, in exchange for monetary rewards in 1998-1999.

"I don't have anything on that," Gibbs said, calling the situation a "law enforcement matter " and referring questions to the Department of Justice. Dean Boyd, spokesman for the National Security Division at the U.S. Department of Justice, also had no comment on the case.

Meanwhile, a senior law enforcement official told CNN that five suspected Russian spies arrested in Virginia and Massachusetts in late June are being taken to New York, where the other five suspects in the case were arrested. The official, who spoke on condition of not being identified by name, said the U.S. Marshals Service was moving three individuals from Alexandria, Virginia, and two from Boston, Massachusetts, to New York,

An arraignment hearing for all 10 of the suspects arrested in the United States was scheduled for Thursday afternoon, according to the U.S. Attorney's office in New York. The attorney's office also announced that one of the suspects, Vicky Pelaez, would have a bail hearing on Friday after the U.S. District Court in New York granted a government request to stop her bail order.

Earlier, a lawyer for Pelaez had said he expected her to be released on bail Wednesday.

In Moscow, Sutyagin's mother and his younger brother, Dmitry, visited him Wednesday in Moscow's Lefortovo prison, where, they said, he told them of the plans for the exchange.

Relating the details her son provided, the mother said he was forced to sign a paper in which he pleaded guilty to spying, something he has previously refused to do. She couldn't say what other conditions there would be for his release.

The family doesn't know why Sutyagin is being sent to Britain. He has no relatives, friends or acquaintances there and no place to stay, they said.

Russian security officers haven't said why they chose Britain for a destination. Dmitry Sutyagin said "no explanation was given whatsoever."

"He was told he's flying to Vienna, where people from London will meet him at the airport and then take him further to London," Dmitry Sutyagin said.

"He doesn't consider this as a release from prison but more like an exile, an extradition from the country," he added, saying that his brother "is being left with a Russian passport, he remains a Russian citizen. Legally, [his release] will be formalized as a pardon after which he leaves the country voluntarily."

"He has never pleaded guilty because he was taking all the information from open sources. He did Russian press reviews on defense production issues, etc., and passed it on to a British consulting company, Alternative Futures," Dmitry Sutyagin told CNN.

Ernst Chyorny, a member of the Public Committee in Defense of Scientists in Russia, said Igor Sutyagin's mother also told him about the possibility of a swap.

Chyorny said Sutyagin recently had been transferred from his prison camp in Russia's northern Archangel region to the Moscow facility.

Earlier on Wednesday, Russian news agencies reported that Sutyagin may be swapped along with other individuals in exchange for the people suspected of spying for Russia and detained in the United States.

The Moscow City Court convicted Sutyagin for high treason through spying and sentenced him to 15 years in prison on April 7, 2004. The Russian Supreme Court later upheld the sentence on appeal.

Sutyagin worked at the Moscow-based Institute for U.S. and Canada of the Russian Academy of Sciences and studied defense and political issues.

Neither the Russian Federal Security Service nor the Foreign Ministry had any comment regarding Sutyagin's possible exchange.

"Some observers agreed that he had no access to classified information and described the severe sentence as an effort to discourage citizens from sharing sensitive information with professional colleagues from other countries," the State Department said in a report.

On Wednesday morning, judges in Boston and Alexandria ordered five of the Russian spy ring suspects to be moved to New York for more proceedings.

The Boston judge made the ruling in the case of Donald Heathfield and Tracey Lee Ann Foley, while a federal judge in Alexandria ordered that suspects Mikhail Semenko, Michael Zottoli, and Patricia Mills also be moved to New York.

In all, 11 suspects have been indicted by U.S. prosecutors in the alleged spy ring case. Ten of them were arrested in the United States in late June, and the other was detained in Cyprus and then released on bail. His whereabouts are unknown.