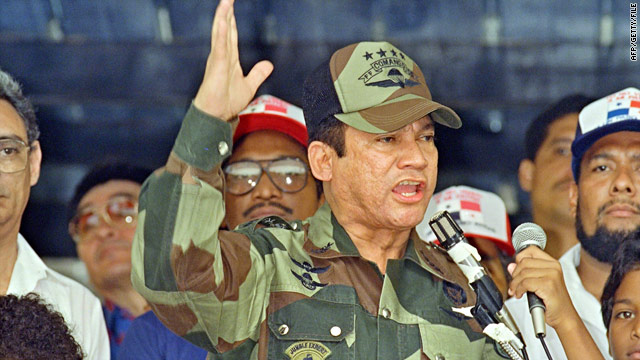 Paris, France (CNN) -- A French court on Wednesday sentenced Manuel Noriega to seven years in prison for money laundering -- but.the former Panamanian dictator could be eligible for parole as early as next year, his lawyer told CNN.

Noriega, who has been a prisoner since being toppled in a U.S. invasion more than 20 years ago, was also fined 2.2 million euros ($2.7 million), the amount he was accused of laundering in drug trafficking profits through French banks.

The former dictator, who was was extradited from the U.S. to France in April, looked shaken and disconsolate at the sentence. Noriega spoke briefly to his three daughters after the sentencing, then had to be helped out of the court by French police, CNN's Jim Bittermann reported from the scene.

Noriega's lawyer, Yves Leberquier, said during the trial he was "flabbergasted" at prosecutors' call for his client to spend 10 years in jail, saying that a long sentence would mean death in jail for Noriega. If he serves the full seven-year sentence he will be 83 when he is released.

But another lawyer, Antonin Levy, said Noriega would get credit for the 32 months he served in a U.S. prison during a court fight over his extradition to France to face the charges. He can apply for parole halfway into his seven-year sentence, Levy said.

During the trial, Leberquier tried to paint Noriega as the victim of larger geopolitical forces, accusing the U.S. of placing and moving pawns to serve its interests.

"I received high praise from the U.S., Interpol and other countries who all benefited from my fight against drugs.
--Manuel Noriega

He urged the court to see beyond the image of Noriega as a dictator and a drug trafficker, which he said was given to him by the United States.

The rise and fall of Noriega, Central America's strongman

Noriega told the court that he had a once-strong relationship with the United States.

"I received high praise from the U.S., Interpol and other countries who all benefited from my fight against drugs," Noriega said.

Testifying in Spanish -- and standing for a total of five hours with only two five-minute breaks -- he added, "I was especially in contact with the CIA," describing himself as a "mediator."

The CIA has not commented on Noriega's claims.

U.S. Secretary of State Hillary Clinton cleared the way for Noriega to be sent to France in April after he spent more than 20 years in a U.S. federal prison.

Noriega and his attorneys had argued that the United States was violating the Geneva Convention by not sending him back to Panama, where he was seized by U.S. troops after the United States invaded that country in 1989.

After his drug conviction, Noriega was given prisoner of war status. His federal sentence, originally for 30 years, ended in September 2007 after time off for good behavior.

In Panama, Noriega is wanted for the murder of a political rival. Panama has requested his extradition, but the United States honored France's extradition request instead. Panama has convicted him in absentia but has said he would get a new trial if he returns to his home country.

CNN's Jim Bitterman and Saskya Vandoorne contributed to this report.