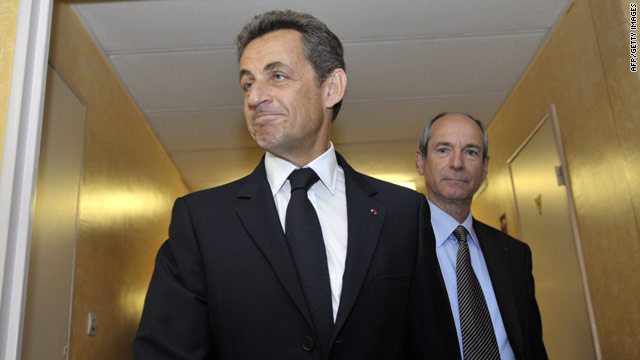 "I would so like it if the country could be passionate about the big problems such as health, pensions, or how we can create growth, instead of getting involved with the first slanderous horror which has only one goal: to bring people down without any element of truth," Sarkozy told reporters.

Sarkozy spoke after a French investigative website, Mediapart, published an interview Tuesday with a former Bettencourt accountant identified only as "Claire T." She said she prepared envelopes of cash that were to be given to both Sarkozy and current Labor Minister Eric Woerth, who previously worked in the Budget Ministry and was in charge of reforms to France's retirement system.

Allegations of payments to Woerth emerged from secret recordings allegedly made by Bettencourt's butler and now being considered as potential evidence in a fraud case involving the heiress.

"Her statements are completely credible. She was close to Madame Bettencourt," Gillot said. "My client is under a lot of pressure. (She) had had enough and decided to tell the truth."

Gillot told French news agency Agence France-Presse that Bettencourt's financial adviser, Patrice de Maistre, asked his client for 150,000 euros ($188,800) and said he would give it "discreetly" to Woerth at a dinner.

Claire T. said she believed Sarkozy also received envelopes in person while he was mayor of Neuilly-Sur-Seine between 1983 and 2002, Mediapart reported.

"Everyone in the house knew that Sarkozy went to see the Bettencourts to collect money," Mediapart quoted the woman as saying.

Among the claims is that Sarkozy's 2007 presidential campaign received money in excess of the 7,500-euro ($9,440) limit permitted for political donations to parties. That would make the payments -- if proven -- illegal, according to Agence France-Presse.

Sarkozy's political opponents called Tuesday for him to address the allegations directly.

"Sarkozy should speak up," said Jean Marc Ayrault, president of the Socialist Party group in the French National Assembly.

Jean Francois Cope, president of the Union for a Popular Movement, told broadcaster France 2 that Sarkozy "must speak to the French people."

Woerth vowed not to resign, telling BFM on Tuesday it would only bolster his accusers.

The tape with the allegations against Woerth emerged in connection with the trial of a photographer who is accused of scamming Bettencourt.

Photographer Francois-Marie Banier went on trial Thursday in Paris, accused of bilking the 87-year-old L'Oreal heiress out of a billion euros that she allegedly gave to him.

Bettencourt's daughter says her mother is not mentally competent to handle her own affairs and took the case to court to recover the money.

Bettencourt and Banier have known each other for years.

The trial is currently delayed while officials review the secret recordings, which emerged in June.

Banier's attorney welcomed the delay to the trial.

He said that the lawyer for Bettencourt's daughter had manipulated the media to create a negative impression of his client and that time was needed to investigate how the clandestine recordings were obtained.

A website published the secret recordings, allegedly made by Bettencourt's butler, of conversations between the heiress and her financial adviser.

They contain references to a bank account in Switzerland containing 80 million euros ($98.3 million), which had not been reported on Bettencourt's taxes.

The recordings also contain references to payments to two ministers in Sarkozy's government, including Woerth.

The tapes revealed that Woerth's wife was, until late June, the deputy to Bettencourt's financial adviser.

Banier's lawyer, Herve Temime, called the case "nauseating" and said, "We are no longer in a fair trial."

Bettencourt's lawyer, George Kiejman, also said there was no chance of a fair trial, in part because of the vast amount of media attention it has received.

Banier faces up to three years in prison and a 75,000 euro ($92,000) fine if he's convicted at the trial, which was held at a court in the Paris suburb of Nanterre.

CNN's Saskya Vandoorne and Jim Bittermann contributed to this report.