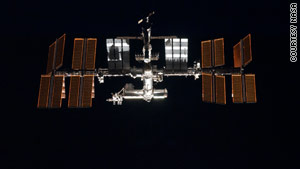 The Progress cargo vessel, a resupply craft, was trying to dock with the space station Friday when a technical problem occurred about 20 minutes before the scheduled docking time, NASA spokeswoman Lynette Madison has said.

Six people aboard the space station -- three Americans and three Russians -- were not in danger, Madison said.

Progress resupply vehicles typically deliver supplies to the space station and haul away trash, burning up on reentry.