Athens blast kills at least one 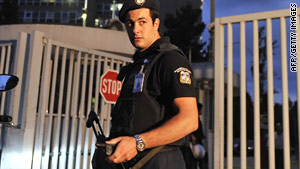 Police guard the entrance to the Ministry of Citizen Protection in Athens, Greece, after Thursday's bombing.
STORY HIGHLIGHTS
RELATED TOPICS

Athens, Greece (CNN) -- One person was killed in an explosion at the Ministry of Citizen Protection in Athens, Greece, on Thursday, a ministry official said.

The blast took place not far from the office of the minister, Michalis Chrysochoidis, journalist Elinda Labropoulou reported for CNN.

It is not clear whether he was in his office when the blast happened. But he appeared on Greek television shortly after the explosion, saying, "we are not afraid," Labropoulou reported.

"I lost a colleague and a friend," Chrysochoidis said.

The bomb was in a parcel delivered to the desk of the assistant to the secretary of the ministry, CNN affiliate Mega Channel reported. It is not clear whether the package was opened.

There has been no claim of responsibility, police said.

The ministry is responsible for public order, including policing.

Government buildings, banks and international businesses in Athens are targeted fairly regularly by bombers, but it is unusual for people to be killed.

Bombers often phone warnings to newspapers or police before the explosions. It is not clear whether a warning was issued Thursday.