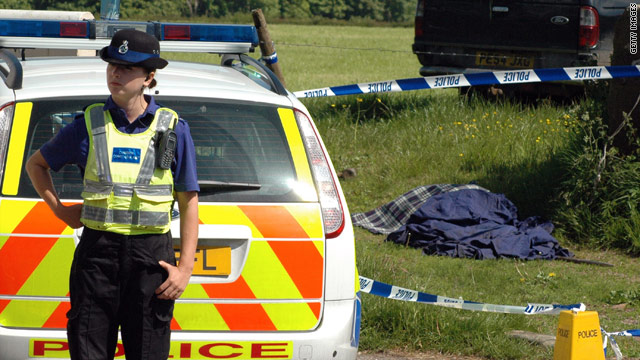 London, England (CNN) -- At least 12 people have been killed and 25 injured after a gunman -- believed to be a local taxi driver -- went on a shooting spree through three small towns in the English county of Cumbria on Wednesday.

After a large scale search, Cumbria police found the body of the suspected gunman, 52-year-old Derrick Bird, in a wooded area of Boot, a village in the Lake District, a popular tourist area.

"I've never known anything like this, where somebody would want to walk out and kill so many people in such a beautiful place in such a short space of time," Hyde said.

Police were working 30 separate crime scenes and are still attempting to determine the motive, Hyde said. Investigators are looking at Bird's history and his access to firearms, he said.

Police named Bird as a suspect following reports of the first shooting mid-morning on Wednesday in the Irish Sea port town of Whitehaven.

"Our focus is now on the movements of Mr. Bird this morning," authorities said. "Our thoughts are with the families in these tragic times. We are asking for any witnesses to come forward and help us with our investigation into the events of this morning."

British Prime Minister, David Cameron said the government would do whatever it could to help the communities affected.

"When lives and communities are suddenly shattered in this way, our thoughts should be with all those caught up in these tragic events, especially the families and friends of those killed or injured," he said.

Were you there? Send us photos, images

Armed police patrols and dog squads were dispatched in the hunt for the gunman after the first shots were fired at 10:35 a.m. (5:35 a.m. ET) in Whitehaven.

Police issued a photo of the Bird and urged members of the public to stay indoors until further notice.

More shots were fired in the small towns of Seascale and Egremont, with officers attempting to track the suspect on land and by air while ambulance crews attended the victims. Footage from one of the shooting scenes showed a covered body lying on a street.

"Police are working to identify the individuals and inform relatives," Cumbria police said. "Ambulance crews are in attendance across the area."

Peter Leder, who said he was a friend of Bird's, told CNN he spoke to Bird last night and was told: "You won't see me again."

Bird was initially driving a dark gray or silver Citroen Picasso, but police later said he had abandoned his car in the area of Boot, in the Lake District, and was traveling on foot.

Soon afterwards police said they had found a body in a wooded area.

The Lake District is a scenic rural retreat in northern England which is popular with walkers, hikers and tourists.

Leder said Bird has been an independent taxi driver in Whitehaven for more than 20 years and described him as "an outgoing, well-known guy, who everyone liked."

Bird was divorced several years ago and has two children, both boys, who have moved away from home, he said. Bird is very close to his mother, who is very ill in a local nursing home, Leder said.

The vehicle police said Bird was driving at the time of the shootings was his regular taxi cab, Leder said.

A police hotline was set up for concerned relatives of those involved.

John Bevir, a reporter for CNN affiliate ITV, described nearby Whitehaven as a sleepy seaside town. "Things like this just don't happen here," he said. "Well, they didn't, until this morning."