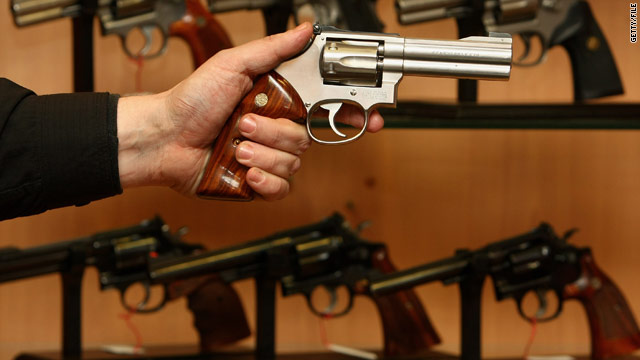 Gun controls were tightened in the UK following previous mass shootings in 1987 and 1996.
STORY HIGHLIGHTS

London, England (CNN) -- The shooting spree by taxi driver Derrick Bird across Cumbria, northern England has brought painful reminders of other mass shootings in the UK.

The UK already has some of the toughest gun control laws in the world, introduced in the wake of two infamous UK mass shootings.

In 1987, Michael Ryan, 27, killed 16 people in the southern English town of Hungerford, Berkshire, as he went on the rampage for several hours armed with a pistol, a hand grenade and an automatic rifle.

Among Ryan's victims were his mother, a policeman who tried to stop him and a woman who was picnicking in a nearby wood with her two children. Ryan, who wore combat fatigues while he carried out the massacre, was eventually tracked down to an unoccupied college building, where he shot himself.

The UK government introduced new legislation following the massacre under the Firearms (Amendment) Act of 1988, making it registration mandatory for owning shotguns and banning semi-automatic and pump-action weapons.

Nine years later Thomas Hamilton, a former Scout leader, entered a school gym in the small Scottish town of Dunblane, Scotland. He opened fire on a group of five- and six-year children, killing 16 pupils and their teacher before killing himself.

In 1997 legislation banned all pistols in the UK.

Additionally after both Hungerford and Dunblane there were firearm amnesties across the UK, resulting in the surrender of thousands of firearms and rounds of ammunition.

Anyone wanting to legally own a gun in the UK now has to hold a license.

Police interview applicants who must disclose criminal convictions and explain why s/he wants a firearm. Checks are also made with the applicant's doctor -- sometimes to make sure the doctor does not have concerns about the applicant owning a weapon -- and sometimes independent medical advice can be sought.

Calls for gun control in the UK are at their fiercest following mass shootings such as Hungerford, Dunblane and now Cumbria.

Did you see anything? Send us photos, images

During the recent UK election, however, gun control barely figured amid the literature of the main political parties.

The then Labour government said that: "Homicides are at the lowest level for a decade -- gun murders are at their lowest for 20 years, and our gun laws are among the toughest in the world."

Meanwhile the Liberal Democrats, now members of the governing coalition, asked that hospitals share information on firearms injuries with police so that they could target appropriate geographical areas.

Many holders of gun licenses are often affiliated to rural sports organizations.

In a statement on its website the British Association for Shooting and Conservation (BASC) -- which had its origins in the sport of wildfowling -- expressed its "deep shock" at shootings in Cumbria.

Simon Clarke, spokesman for the organization, said it was too early to comment on the shootings in Cumbria but added: "Britain's firearms licensing system is amongst the toughest in the world and includes numerous safety and medical checks and balances.

"The UK has a well-worked approach to draw all possible lessons from any such event and we will co-operate fully where our expertise is appropriate."