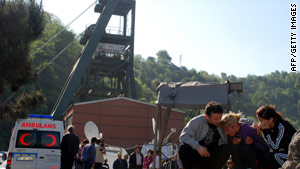 Relatives of the trapped miners wait for news near the mine in northern Turkey.
STORY HIGHLIGHTS
RELATED TOPICS

Istanbul, Turkey (CNN) -- Hundreds of rescue workers are racing to reach 30 miners, who have spent the last 24 hours trapped underground after an explosion rocked a coal mine in northern Turkey on Monday.

The accident occurred at the enormous Karadon coal mine, located some 12 kilometers, or more than 7 miles, east of the Black Sea port of Zonguldak.

Turkey's Labor Minister Omer Dincer said the cause of the blast wasn't immediately known but it could have been prompted by a buildup of methane underground, according to Turkey's semi-official Anatolian Agency.

An official from the Zonguldak governor's office told CNN that intensive rescue operations are continuing to save the 30 workers trapped 540 meters, or about 1,700 feet, underground.

"It is not possible to know what conditions the workers are in or to estimate how long it will take to reach them because the rescuers don't know what they are going to face as they go along," the official said.

CNN's sister network, CNN Turk, has been airing interviews with distraught relatives of the trapped miners, who are holding a vigil by the coal mine.

Turkey's coal mining industry does not have a good track record in terms of safety. This is the third major mine accident within the last six months in the country.

In 1992, 270 people were killed in a mine explosion near Zonguldak.