The 'useless' work of Anish Kapoor 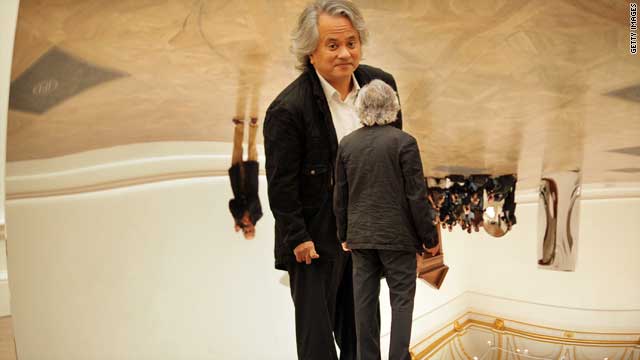 Indian-born sculptor Anish Kapoor is one of the most renowned contemporay artists.
STORY HIGHLIGHTS

Often blurring the boundaries between sculpture and architecture, Kapoor's exuberant and bold creations have excited the minds of both critics and the public alike, making him one of the most important artists to have emerged in the last decades.

But when asked about the meaning of his art and who it is for, Kapoor emphatically dismisses notions of greatness.

"It's useless, it's for no one!" he told CNN. "In the end, I'm extremely fortunate to be in a situation where people appear to want to look at what I do."

And people are looking: since the early 1980s, viewers in their thousands have flocked to museum halls and public spaces across the world to see Kapoor's captivating creations.

Last year, Kapoor became the first living artist to exhibit his works in the whole of London's Royal Academy. More recently, he was commissioned to produce a spiralling 115-meter-high tower to mark the 2012 Olympics in the UK capital.

And as more commissions keep pouring in, Kapoor, who has famously declared that he has "nothing to say" with his art, is likely to continue exciting people's imagination for years to come.

Kapoor spoke to CNN's Revealed about money, India and celebrities.

CNN: Why and when did you decide to become an artist?

Anish Kapoor: I spent my youth and teenage years, even as a child really, making things but I never thought that I ought to be an artist. But somehow when I was 17 it felt as if that was a decision I was ready for.

CNN: Do you want to get away from associations to India in your work?

AK: I'm Indian, I grew up there, it obviously is important to me but I have no wish to make Indian art; I want it to reach as far as it can. Inevitably, there will be things in it that one might read, or want to see, as having roots in my origins but I hope it goes way beyond that.

CNN: Is it pointless to look at you in the context of the history of art?

AK: We all are children of our time, we can't be anything else. Art history will take care of itself, what one has to do is get on and make the work. The most difficult challenge is not "how is it going to live in art history?" but "how can one challenge oneself to be a deeper, more poetic, more poignant artist." To invent and reinvent the language that one is given. That's a huge challenge.

CNN: You say you aren't trying to say anything, how should we interpret that statement?

AK: The studio is the place in which things get discovered. It's more like a laboratory and less like a place of manufacture. If one comes to that process with preconceptions about what one has to say and how one has to say it, all you affect is the stumbling upon what there is to say.

I prefer the view that says that I don't have an agenda and try to leave the space open for what comes out of this experimentation. Somehow, what comes out can be taken seriously and it's in that process that one hopes to reach a meaning, however big or small.

CNN: Is your interpretation of the work more important than the next person's?

AK: We all look at things with our own baggage, there's no such thing as an unencumbered view. All of us look with a history, and the interesting thing about contemporary, particularly abstract, art is that it can allow those prior histories to find a place in the act of looking.

CNN: What's the relationship between money and large-scale art?

AK: First of all let me say scale is a tool of sculpture, it's a very, very difficult thing to handle and provided one doesn't let it run away, it can be very powerful. So it's a tool I'm interested in. It can make your jaw drop and that's kind of an interesting human reaction.

CNN: How aware are you of your stature?

AK: One has to continually remind oneself of a few key things. One of them is try never to believe the bullshit about yourself, the other is making work is always a challenge and when it stops being a challenge it's not worth doing anymore. So, the measure always is in terms of what one's done before, and how one can remain somehow true to himself and creative.

CNN: Do you enjoy being a name and a public figure?

AK: We live in a celebrity culture, in which most people who are kind of celebrities do nothing of any interest to anybody. Artists shouldn't be celebrities, we're people who make things.

One has to come into the studio and get on with it. I lead, in a way, quite a quiet life, in which I spend probably way too much time in the studio.

CNN: Who is this work really for?

AK: It's useless, it's for no one! I don't think it's for anyone or anything really; in the end, I'm extremely fortunate to be in a situation where people appear to want to look at what I do.

An artist affords themselves the luxury of entering dialogue with themselves about a whole series of pre-occupations, in the hope that if one does that deeply enough it'll have a resonance with the viewer.