60 dead in Russian mine blasts 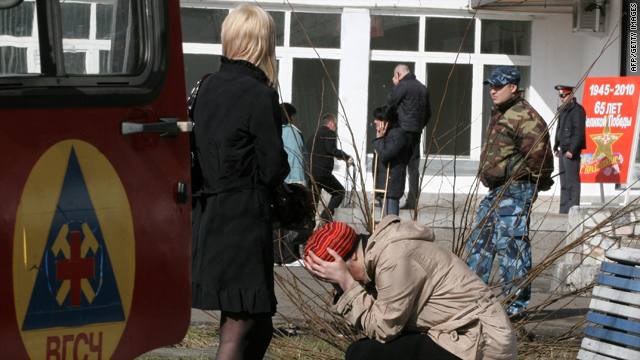 Relatives sit near the Raspadskaya mine in the Kemerovo region of southwestern Siberia on Sunday.
STORY HIGHLIGHTS
RELATED TOPICS

Rescue teams have combed more than 75 percent of the mine's labyrinth of underground tunnels looking for survivors and the dead.

"We have about 24 hours left to rescue miners (who are alive), if they are still there," emergency Minister Sergei Shoigu said on the ministry's website.

The gas explosion in the Raspadskaya mine occurred at 8:55 p.m. Saturday (12:55 p.m. ET), when 359 people were working at the time. The mine is located near the western Siberian town of Mezhdurechensk, more than 2,300 miles east of Moscow. Nearly 300 people were evacuated shortly after the explosion.

More than 50 rescue workers had gone into the mine to recover the rest of the victims when a second gas explosion rocked the structure about four-and-a-half hours later, causing more fatalities and destruction, officials said. Dozens of miners and rescue workers were trapped as a result of that second, much more powerful explosion, and all communications with them were disrupted.

Thick smoke and high methane concentrations in the mine prevented active rescue operations underground on Sunday and most of Monday morning, Russian officials said.

The operation was further complicated by the very size of the mine: Raspadskaya is one of the largest in Russia's mining industry. It has dozens of underground tunnels with a total length of almost 200 miles, according to Kemerovo Gov. Aman Tuleyev.

Prime Minister Vladimir Putin said on Russian state television Tuesday that the investigation is closely analyzing all possible clues to determine the cause of the blasts.