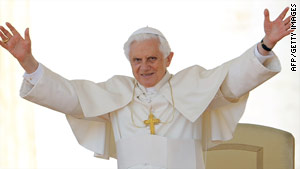 Lisbon, Portugal (CNN) -- Pope Benedict XVI made one of his strongest statements to date on the sex abuse scandal sweeping the Roman Catholic Church, saying Tuesday the reality he has seen is "terrifying."

Benedict was speaking on his plane en route to Portugal, where he is making a four-day visit.

He has said very little in public about the scandal, which has swept Western Europe this year, leading bishops to quit or offer to quit in Ireland, Germany and Belgium.

Hundreds of people have come forward this year saying they were abused by priests or other Catholic authority figures there and in Austria, Netherlands and the United States.

He said three weeks ago he was "greatly moved" by meeting victims of abuse in Valletta, Malta.

He said he gave the victims "assurances of the church's action" after the April 18 meeting.

It is not clear if he plans to meet victims of abuse in Portugal, which has not been as badly shaken by the scandal as many other European countries.