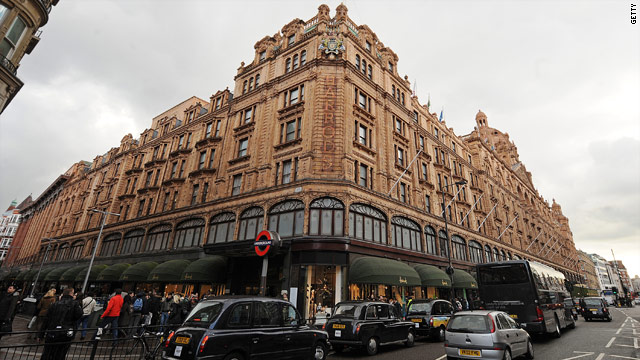 Harrods began as a small store in 1849 in London to capitalize on trade from the upcoming Great Exhibition in nearby Hyde Park.
STORY HIGHLIGHTS
RELATED TOPICS

Al Fayed, who has been chairman of the store for 25 years, has decided to retire and spend more time with his children and grandchildren, said Ken Costa, chairman of Lazard International.

Al Fayed sold Harrods to Qatar Holding, which will become only the fifth owner of the store since it was created in 1849, Costa said.

Qatar Holding is a fully owned affiliate of Qatar Petroleum, a state-owned company based in Doha.

It was in the mid-1980s that al Fayed bought Harrods, a high-end department store in London's exclusive Knightsbridge neighborhood.

In 2005, he unveiled a bronze statue inside the store featuring Princess Diana and his son, Dodi Fayed. Titled "Innocent Victims," the statue was meant to depict the pair in eternal happiness together, al Fayed said at the time.

Dodi Fayed and Diana died in 1997 when the car they were riding in crashed in a Paris tunnel as they were pursued by paparazzi.

The Sunday Times Rich List two weeks ago put al Fayed's personal fortune at £650 million ($962 million). It said he was only one of three people among the top 100 names on the list to have increased their wealth.

"What recession? Not for Harrods this time," al Fayed told the paper.

Al Fayed, who is Egyptian, has lived in Britain since the 1970s and regards it as his home, but he has repeatedly been denied a British passport.

Harrods was founded by London grocer Charles Henry Harrod, who originally set up shop in east London. Harrod wanted to escape the inner-city filth and capitalize on trade from the upcoming Great Exhibition in Hyde Park, so in 1849 he took over a small shop near the park in what was then the new district of Knightsbridge, on the site of the current store, according to Harrods.

It was Harrods that had the very first sale, the Winter Clearance of 1894. They also introduced the world's first escalator in 1898, according to the store -- with brandy at the top for nervous customers.

In December 1983, the Irish Republican Army detonated a car bomb near Harrods that killed six people during the Christmas shopping rush.

Harrods was starting to find itself outmoded in the 1980s when al Fayed took over, purchasing it as part of the House of Fraser Group for £615 million, the store says.

Under al Fayed, Harrods went through a major refurbishment that included constructing the Egyptian Escalator, a $30 million "homage to ancient Egypt."