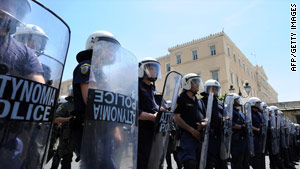 Garbage collectors, cleaners, municipal office workers and other local government staff gathered Monday morning, waving banners with slogans like "Get your hands off our rights."

A €110 billion ($146 billion) aid package for Greece was announced Sunday, but Athens is introducing tough austerity measures to meet European Union and International Monetary Fund conditions on the deal.

German leader Angela Merkel tried to rally her country behind the deal Monday, since Berlin will have to come up with the lion's share of the funds, but the bailout is unpopular there.

Video: $146 billion to bail out Greece

"It doesn't mean only that we help Greece, but it also means that we can stabilize the euro in total and that we also help the people in Germany," she said.

Greece's Federation of Local Government Workers called the 24-hour strike for municipalities across the country Monday.

It appeared to be small and peaceful in Athens, but an even broader strike has been called for Wednesday -- and a group of unemployed teachers stormed the national television station ERT Monday in an attempt to reach the studio where the station was taping an interview with Greek Minister of Education, Lifelong Learning & Religious Affairs Anna Diamandopoulou.

Fotis Delis, a spokesman for the Greek Police, said about 15 people got inside ERT headquarters but were blocked from the studio when police arrived. A broken window was the only damage during the incident, Delis said.

Diamandopoulou was rushed out a back entrance, ERT correspondent Fanis Papathanasiou told CNN, but the protesters reached another studio where Maria Houkli was broadcasting the station's newscast. Papathanasiou said the station immediately went into commercial break. ERT allowed the protesters to tape a statement that aired later.

In it, an unnamed, male spokesman -- surrounded by his co-workers -- said the group was protesting the cuts to education funding and would continue to speak out against them. The group left when the tape was aired.

Some €80 billion ($106 billion) will be made available through European Union members, with up to 30 billion available in the first year, Eurogroup President Jean-Claude Juncker said in announcing the agreement Sunday evening from Brussels, Belgium.

Up to €30 billion ($40 billion) will be available in the first year, Juncker said, with the first funds released made before May 19.

What does Greece's downgrade mean?

The package includes a promise by Greece to cut its budget deficit to 3 percent of gross domestic product, as required by European Union rules, by 2014, according to Papaconstantinou.

Greece had a choice between "destruction" and saving the country, and "we have chosen of course to save the country," Papaconstantinou said.

CNN's Christine Theodorou and Erin McLaughlin contributed to this report.