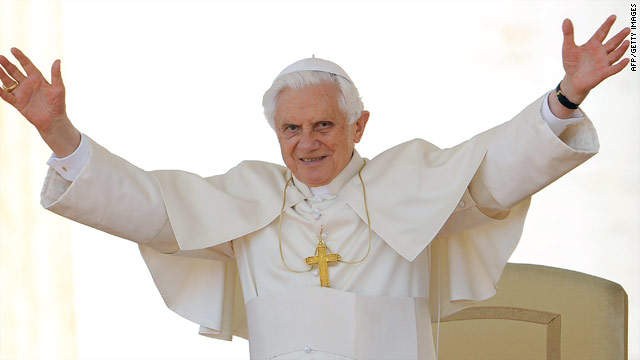 Rome, Italy (CNN) -- The Vatican's top prosecutor for sexual crimes against children on Wednesday rejected accusations he did not do enough to stop a priest accused of child abuse on the Vatican's doorstep.

La Caramella Buona, the organization that brought accusations against the priest, did not give Monsignor Charles Scicluna enough information to start an investigation, he told CNN.

"By the end of the meeting with Caramella Buona in 2007 I was left with no real information I could act on," he said. "I did not have one single allegation I could refer to the bishop."

La Caramella Buona, an anti-pedophilia organization, had removed the names of the accusers from paperwork they showed Scicluna, he said, so he was left with no recourse but to advise them to go to the police.

The priest in question, the Rev. Ruggero Conti, was arrested in 2008 and testified Tuesday.

"I am not a monster. I am innocent," Conti said in court.

Two alleged victims told police that Conti masturbated them and forced them to perform oral sex on him in his home, where he often invited them to dinner and to watch movies, according to court documents.

La Caramella Buona says Conti's superiors knew of allegations against him as early as 2006 but did not do enough to stop him.

Prosecutors say they will call Conti's bishop, Monsignor Gino Reali, to testify. Reali was interrogated by police as part of their investigation into Conti, the activists say.

Putting a bishop on the stand in Rome, the capital of deeply Catholic Italy, would be potentially explosive, particularly against the background of a Europe-wide scandal.

The Catholic Church has been rocked this year by allegations of child abuse by Catholic clergy in Ireland, Germany, Austria and the Netherlands, following similar accusations in the United States in the past decade.

Pope Benedict XVI met this month with a group of men in Malta who say they were abused. He prayed and cried with them.

He has repeatedly insisted the church will do everything in its power to prevent child abuse.

But the trial taking place on his doorstep may undercut such assurances, especially since the alleged abuse of boys took place well after the scandal came to light in the United States.

Conti, a former adviser to the mayor of Rome, was arrested in June 2008, more than a year after La Caramella Buona brought accusations against him to Catholic Church officials.

Roberto Mirabile, the president of the organization, said a priest warned his group about Conti in the spring of 2007.

The group met with the alleged victims and their families, Mirabile told reporters on Friday.

Mirabile himself went to top Vatican officials, including the Scicluna, he said.

Scicluna said there was no Vatican record of complaints about Conti and advised him to go to the police with his concerns, Mirabile said.

Mirabile accused Scicluna of "washing his hands" of the matter.

La Caramella Buona officials went to the police, who launched an investigation in November 2007.

Conti was arrested as he prepared to go to World Youth Day in Australia in June 2008. Police believe he continued abusing children until March 2008, Mirabile said.

Conti's superior, Bishop Reali, told police in December 2008 he knew of vague accusations against the priest two years before he was arrested but did not take action, according to court documents.

Nino Marazzita, a lawyer for La Caramella Buona, provided CNN with what he said were transcripts of the prosecutor's interrogation of the bishop.

"You know that there are so many 'rumors,'" Reali told investigators, according to the lawyer. "And I can't run after each one of them."

Conti accused La Caramella Buona of being ideologically opposed to him in his testimony Tuesday. The group denies it.

Reali has not spoken publicly about the case since the day Conti was arrested.

His diocese issued a statement then saying Reali had "learned the news with incredulity," had "full trust in the investigating magistrates" and said "each person has the right to be considered innocent until proven guilty."