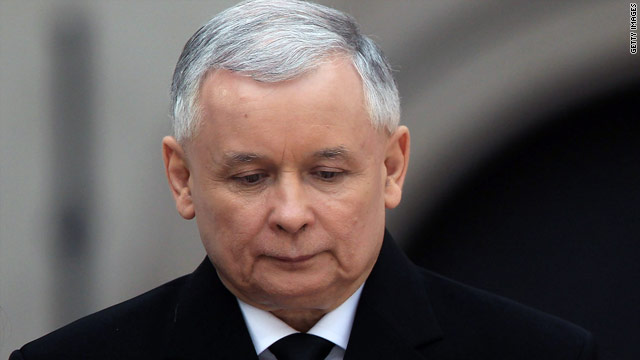 Jaroslaw Kaczynski attends the funeral of his brother at Wawel Castle on April 18.
STORY HIGHLIGHTS

(CNN) -- Jaroslaw Kaczynski, the twin brother of the Polish president killed in a plane crash earlier this month, will be a candidate to succeed him, his party announced Monday.

Poland will hold elections on June 20 to elect a successor to Lech Kaczynski, who died April 10, along with 95 others including his wife and many top military leaders and officials.

Acting President Bronislaw Komorowski has also said he will be a candidate.

Jaroslaw Kaczynski was prime minister for about two years, until the brothers' Law and Justice party lost parliamentary elections to the Civic Platform in 2007.

Lech Kaczynski and his wife were laid to rest on April 18, marking the end of a journey filled with grief for the central European nation.

Their bodies were taken along Krakow's historic "royal route" from St. Mary's Basilica to Wawel Castle after the funeral mass.

Kaczynski's coffin was draped in the presidential flag, while his wife's was covered with the red-and-white Polish flag during the ceremony at the huge, elaborately decorated cathedral.

Tens of thousands of Poles dressed in black lined the streets and tossed flowers at the motorcade carrying the president and first lady, who were killed in a plane crash in Russia April 10.

About 50,000 mourners, some waving flags, sat in silence in Market Square outside the cathedral, where giant monitors televised the service, the Polish government press office said.

Ninety-six people died in the plane crash, including dignitaries and top military leaders. The group was on its way to a service commemorating Polish prisoners of war massacred in Russia during World War II. The plane crashed in bad weather.