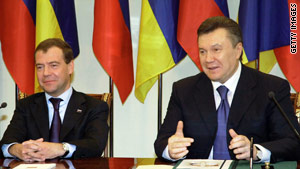 Moscow, Russia (CNN) -- Russia's president and the newly elected president of Ukraine signed a landmark agreement on Wednesday that signals an end to years of enmity between the two former Soviet republics.

Russia agreed to a 30 percent drop in the price of natural gas sold to Ukraine, in exchange for permission to extend Russia's lease of a major naval base in the Black Sea port of Sevastopol, Ukraine, for 25 years.

Seated side by side, Russian President Dmitry Medvedev and Ukrainian President Viktor Yanukovych announced the agreement at the end of a one-day summit in the eastern Ukrainian border city of Kharkiv.

"We have indeed reached an unprecedented agreement," Medvedev said. "The rent [for the naval base] will be increased by an amount equivalent to that of the [gas price] discount."

The agreement may bring an end to years of disputes over natural gas prices, which culminated in Russia turning off the pipeline to Ukraine. The gas dispute left Ukrainians and many Europeans who depend on Russian gas pumped through Ukraine shivering.

Ukraine and Russia had been at odds ever since the "Orange Revolution" swept Yanukovych's anti-Russian predecessor Viktor Yushchenko to power in 2005.

The Russian president said the new deal added a "concrete and pragmatic dimension," to centuries of relations between Ukrainians and Russians.

Opposition groups in Ukraine, however, were quick to denounce the agreement. Former President Yuschenko's "Our Ukraine" party said the treaty would lead to the "Russification" of Ukraine. Former Ukrainian Prime Minister Yulia Tymoshenko said the agreement violated part of the Ukrainian Constitution, which forbids the country from hosting foreign military bases after 2017.

According to a spokesman for the Russian president, the new accords will be submitted to the Russian and Ukrainian parliaments for ratification simultaneously on April 27.