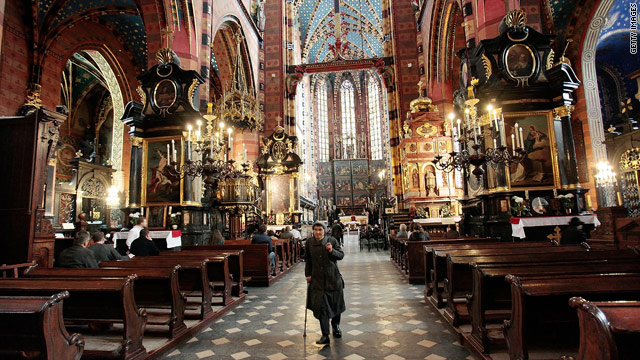 Warsaw, Poland (CNN) -- World leaders' plans to reach Poland this weekend for the funeral of President Lech Kaczynski were in limbo as volcanic ash from Iceland continued to ground flights to and from Europe.

President Obama canceled his trip to Poland because of the ash, the White House said. The United States will be represented at the funeral by the U.S. ambassador to Poland, Lee Feinstein.

"I spoke with acting President [Bronislaw] Komorowski and told him that I regret that I will not be able to make it to Poland due to the volcanic ash that is disrupting air travel over Europe," Obama said in a statement released by the White House. "Michelle and I continue to have the Polish people in our thoughts and prayers, and will support them in any way I can as they recover from this terrible tragedy."

While French President Nicolas Sarkozy was already in Poland on Saturday and prepared to attend services the next day, other key leaders who planned to attend, including German Chancellor Angela Merkel, still faced possible cancellations due to the ash.

Kaczynski, his wife, dignitaries and top military leaders were killed when their plane crashed in bad weather on April 10. They were on their way to a service commemorating Polish prisoners of war massacred in Russia during World War II.

It wasn't clear whether Russian President Dmitry Medvedev, who was still in Moscow on Saturday, would take a flight to Poland for the funeral of the Polish first couple. The Kremlin last week said Medvedev did plan to attend.

Video: Grief to gripes in Poland

Other leaders, including Estonian Prime Minister Andrus Ansip, ditched plane tickets and opted to drive to Poland instead. Latvian President Valdis Zatlers, a close friend of Kaczynski, also planned to make the 13-hour journey from his country to Poland by car.

The White House said the United States would be represented at the funeral by its ambassador to Poland, and that Obama had spoken with Poland's acting president.

"Michelle and I continue to have the Polish people in our thoughts and prayers, and will support them in any way I can as they recover from this terrible tragedy," Obama said in a statement. "President Kaczynski was a patriot and close friend and ally of the United States, as were those who died alongside him, and the American people will never forget the lives they led."

Eurocontrol, Europe's air traffic authority, said it expects about 5,000 flights to take place Saturday in European air space, compared to 22,000 on a normal Saturday. On Friday, there were 10,400 flights instead of the normal 28,000.

The ash cloud was drifting south and east over Europe. Although barely visible in the air, the ash -- made up of tiny particles of rock, glass and sand -- poses a serious threat to aircraft.

The volcano was still erupting and spewing ash Saturday. The eruption began March 20 beneath the Eyjafjallajokull glacier in southern Iceland, blowing a hole in the ice. It worsened over the week, forcing local evacuations and eventually affecting European air space.

There were restrictions on civil flights across most of northern and central Europe, including Austria, Belgium, Croatia, the Czech Republic, Denmark, Estonia, Finland, most of France, most of Germany, Hungary, Ireland, northern Italy, the Netherlands, Norway, Poland, Romania, Serbia, Slovenia, Slovakia, Sweden, Switzerland, Ukraine and the United Kingdom.

The funeral Sunday will proceed as scheduled, though it will be affected by the travel restrictions, said Polish Foreign Minister Radoslaw Sikorsky.

"The papal legate who was supposed to lead the funeral Mass has apparently canceled," he said. "And quite frankly, we can't blame people for not wanting to take even the smallest risk to the security of air traffic in the circumstances."

Britain's Gordon Brown, who has been campaigning to hang on as prime minister since the Parliament officially dissolved Monday, was never scheduled to attend. British Foreign Secretary David Miliband was seeking alternate travel plans.

European Commission President Jose Manuel Barroso was in Strasbourg, France, and was seeking alternative travel options to get to Poland.

Meanwhile, thousands of people gathered in the Polish capital on Saturday to mourn the 96 victims of the plane crash.

Central Warsaw was in a lockdown as a trumpeter played, photos of the dead were displayed in Pilsudski Square, and speeches were delivered honoring the victims.

An estimated 1.5 million people are expected to turn out Sunday to bid farewell to Kaczynski, first at the state funeral and then at a church service in the historic city of Krakow.