All to play for as Clegg shines in UK election debate 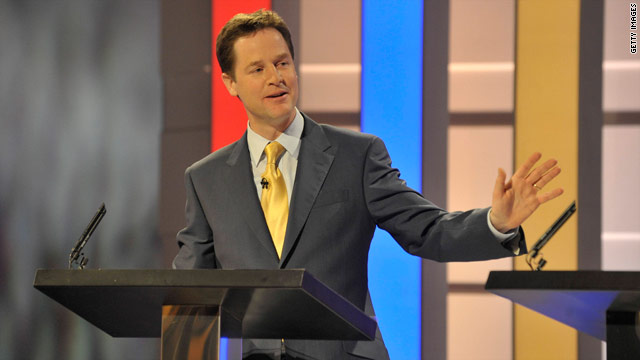 No, there wasn't a Dan Quayle/Lloyd Bentsen moment in Britain's first ever televised leaders' election debate.

Nobody destroyed their prospects with a gaffe, nobody landed a killer blow. But British voters are still entitled to grumble at having been denied for so long the chance to see their would-be leaders in such a public confrontation.

Many will have learned more about the three main parties' policies in 90 minutes than they had ever known before. In an election in which trust and integrity are likely to prove crucial all will have had the chance to contrast close up and under fire the personal mettle of Messrs. Cameron, Clegg and Brown.

Faster-paced than any had expected, the exchanges were informative, intelligent and good-tempered. Thank God for television, which has rescued an election which had previously seemed sterile, predictable and, frankly, boring.

Many of us had noted in advance that the three-pronged contest offered a crucial breakthrough opportunity for the Liberal Democrats leader Nick Clegg. As a third force in British politics his party always has trouble winning its share of media attention between elections.

Operating at Prime Minister's Question Times in the House of Commons the leader of the third biggest party is always at a disadvantage, being barracked by the better-populated Labour and Conservative benches.

But this was "Answer Time" and being given equal billing with the Big Two afforded him an unprecedented opportunity. Few though had imagined how well he would take it.

Clegg was the most relaxed of the three, he engaged more directly with the camera, he picked up well on the names of questioners and he was able frequently to lump Labour and Conservatives together as "You Two", the jaded face of old politics, particularly when it came to the reforms needed to rebuild trust in politics.

Many politicians still don't get it. They do not appreciate just how angry people had become with the parliament that has just ended, a parliament which became a by-word for corruption -- lawmakers' expenses scandals, ex-ministers touting themselves for hire as lobbyists and dodgy political donations by backers seeking to purchase titles or influence while not even being prepared in some cases to pay their British taxes.

More than I have ever found them in reporting elections since the 1960s, voters are dismissive of politicians' promises, distrustful of their motivation and cynical about their methods. It is far more this time than the usual complaint of "Oh, we only see them when they want our votes."

Leading a party untainted by failures in government Nick Clegg has tapped into that anger and is more convincing than the others in promising to clean up the whole way in which politics is conducted.

So how much will the General Election battle now change?

There are two more leaders' debates to come, on international affairs and on economics, and we can certainly expect the Big Two to play it rougher with Mr Clegg after his initial success.

But the genie may now be out of the bottle and comfortable assumptions about voting intentions and likely outcomes may now need serious revision.

Never mind that a series of opinion polls among those who saw the TV debate all made Mr Clegg the winner. The real shock came with publication of the first opinion poll on voting intention conducted after the debate, by Comres for the Independent newspaper and ITN.

That suggested a political earthquake. It put support for the parties at Conservatives 36, Liberal Democrats 35 and Labour 24. Both major parties dropped three points off their previous standing and the Lib Dems rating soared by a full 14 points.

The Lib Dems, who won 62 seats at the last general election and who were privately fearing that they could lose 10 or 12 of them in the face of a Tory revival, will now have their tails up.

They are unlikely to score as high as 36 percent on election night. But with support in the Comres poll for all the other minority parties dropping from 13 points to 5 it suggests that they are now capable of mopping up the bulk of the "neither of the above" protest vote.

The Lib Dems' chances of holding on to marginal seats in the south of England where they are challenged by Cameron's Conservatives have now increased. So have their hopes of gaining seats from Labour in northern cities.

In its turn that would increase the prospect of a hung parliament, with no party holding a majority of the 650 seats in the House of Commons.

In a bid to scare people off voting for the Lib Dems or any of the fringe parties Labour and the Conservatives have been keen to spread the notion that if the election finishes in a hung parliament, without any party having a governing majority, that could see share prices plunging and the pound taking a hammering on the exchanges.

Suddenly this is the election in which there is everything to play for.