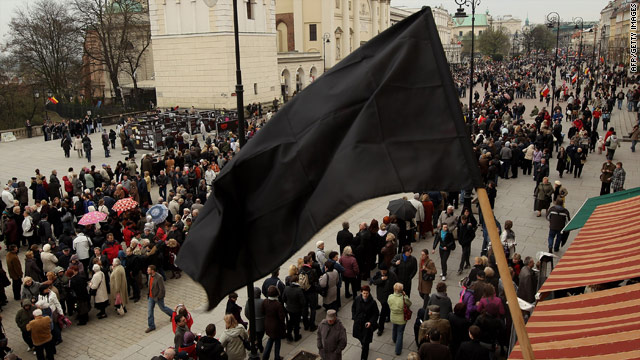 Warsaw, Poland (CNN) -- Polish legislators were planning Wednesday to hold a June election to choose a successor to President Lech Kaczynski, whose death in an air crash is generating unprecedented scenes of public grief.

Mourners lined up through the night outside Warsaw's Presidential Palace to pay respects to Kaczynski, whose body is lying in state alongside that of his wife.

However, amid national unity in the wake of the disaster, there were the first signs of discord with protests reported over a decision to bury the late president and his wife in a crypt previously reserved for monarchs and saints.

The couple were among 96 Polish dignitaries, military top brass and officials who died when the plane carrying them to a service commemorating Polish prisoners of war massacred in Russia during World War II crashed in bad weather.

Their bodies were repatriated earlier this week. Caskets carrying 30 more crash victims were returned to Poland on Wednesday aboard a military jet from Moscow. Draped in Polish flags the caskets were lined up side-by-side by an honor guard during a solemn ceremony at Warsaw's airport.

iReport: Share your photos, video and stories with CNN

The disaster has caused shockwaves through Poland, with thousands of people waiting up to eight hours to pay their respects to the first couple. Due to overwhelming demand, the palace was opened to the public through the night.

A line of up to 15,000 mourners, many dressed in black and carrying pictures of the deceased first couple, could be seen snaking through the center of Warsaw Wednesday.

"I think this is really unique to Poland," U.S. ambassador to Poland, Lee Feinstein told CNN, adding that the devastation to the country's leadership was unparalleled in the contemporary world.

Feinstein described Poland as one of the United States' "staunchest" allies, largely thanks to military support for U.S.-led operations in Iraq and Afghanistan.

U.S. President Barack Obama is expected to be among international figures attending the first couple's funeral service in Warsaw, scheduled for Saturday.

The service will be followed by the couple's burial on Sunday in Krakow's Wawel Castle.

The archbishop of Krakow said burying the late president in the historic crypt was the country's way of honoring him.

"I think in this way the Polish nation wants to include him among the greatest and most revered men in Polish history," Stanislaw Dziwisz said on Polish state television.

There have been reports of protests in Krakow over the decision, while debate has raged online as to whether Kaczynski, seen as unpopular prior to his death, should be buried in a national heroes' cemetery in Warsaw rather than at Wawel.

A Facebook group opposed to the castle burial had garnered 32,000 followers by late Wednesday.

According to Poland's PAP news agency, a date for the election that will choose Kaczynski's successor will be announced on April 21 by acting President Bronislaw Komorowski.

The agency said the date was likely to be June 13 or 20. Under Poland's constitution Komorowski must call the election within 14 days of the president's death with the vote taking place within 60 days.

CNN's Antonia Mortensen in Warsaw, Poland and Maxim Tkachenko in Moscow, Russia contributed to this story.