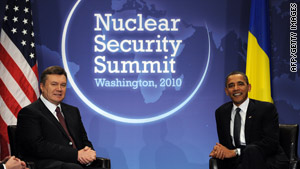 Washington (CNN) -- Ukraine announced Monday that it will get rid of all its highly enriched uranium, which can be used in nuclear weapons, within the next two years.

The announcement by Ukrainian President Viktor Yanukovich followed his meeting with President Obama before the start of a 47-nation summit on nuclear security.

In an exclusive interview with CNN on Monday, Yanukovich said that most of his nation's highly enriched uranium would be gone by the end of 2010.

"The Ukraine has quite a number of power plants and various universities and research institutes where we are trying to understand to best utilize nuclear in a peaceful means," Yanukovich told CNN foreign affairs correspondent Jill Dougherty. "We are working on it. However, we are already taking the necessary step to remove highly enriched uranium from the country. By the end of this year, Ukraine is going to have the larger part of this uranium taken out of the country."

A White House statement said Obama "praised Ukraine's decision as a historic step and a reaffirmation of Ukraine's leadership in nuclear security and nonproliferation."

"Ukraine joins the United States in the international effort to convert civil nuclear research facilities to operate with low enriched uranium fuel, which is becoming the global standard in the 21st century," the statement said.

Yanukovich indicated that the final destination of the highly enriched uranium could be Russia. White House Press Secretary Robert Gibbs said the destination had yet to be determined, but he said Russia was likely to be one of the countries to receive such nuclear materials.

The White House statement said the United States will provide financial and technical assistance to Ukraine to get rid of its highly enriched uranium.

According to Gibbs, the uranium that Ukraine will give up is enough to construct several nuclear weapons. He said Ukraine would convert its nuclear energy facilities to operate on low-enriched fuel.

Gibbs said similar announcements by other nations could come during the summit, which comprises 47 nations discussing how to secure nuclear weapons and materials old and new to prevent them from getting into the hands of terrorists and rogue states.

The United States was prepared to help other nations take similar steps to Ukraine's, Gibbs said.

"The goal is to do all that we can," Gibbs said, adding: "Our assistance and the assistance of our partners and our allies will be important, not just this week but in the coming years."

A White House fact sheet on Monday's announcement called Ukraine "an international leader on disarmament and nuclear non-proliferation and a valued partner in implementation of the Strategic Arms Reduction Treaty (START) since its historic 1994 decision (along with Kazakhstan and Belarus) to remove all nuclear weapons from its territory and to join the Nuclear Non-Proliferation Treaty."

From 1994 to 1996, the document said, Ukraine eliminated all of the intercontinental ballistic missile silos and 5,000 nuclear munitions, including 2,000 strategic-range munitions, long-range cruise missiles and strategic bombers, that remained on its territory following the breakup of the Soviet Union.