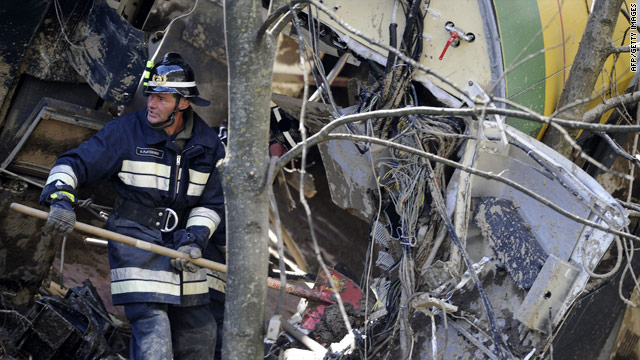 A rescuer searches near the passenger train which was derailed by a landslide.
STORY HIGHLIGHTS

The office had said that the derailment killed 11 people, but it later revised the death toll.

At least 20 people were injured, five seriously, when a landslide derailed the train, authorities said.

The train was a small diesel train with two carriages, traveling on the Val Venosta line. The railway is one of the region's newest, inaugurated in 2005.

Are you there? Send an iReport

The most probable cause of the landslide is a broken irrigation pipe, said Thomas Widmann, head of the transport department for the local government.

The mud from the slide entered the train's cars, suffocating the passengers, he said.

More than 200 rescuers were on the scene.

The train came to rest when it reached the trunk of two big trees, according to a local journalist. One of the carriages was left hanging over the Adige River.