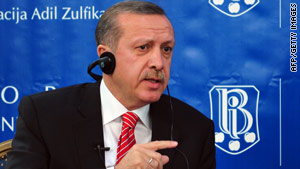 Istanbul, Turkey (CNN) -- The investigation into an alleged coup plot implicating dozens of high-ranking military commanders in Turkey hit a snag this week when two prosecutors leading the case were unexpectedly replaced.

A top official in Turkey's judiciary denied reports that the prosecutors had been replaced for conducting unauthorized searches and raids. Instead, Istanbul's chief prosecutor insisted the change in personnel was a routine procedure.

"These colleagues have not been suspended or cut off from their jobs," said Aykut Cengiz Engin, Istanbul's chief prosecutor, speaking to journalists on Tuesday.

The arrests marked a dramatic setback for the once politically-dominant Turkish armed forces, which have overthrown four governments in the last half century.

The Sledgehammer investigation has also signaled a key turning point in the ongoing power struggle between the country's long-ruling secular elite and the Islamist-inspired elected government of Prime Minister Recep Tayyip Erdogan.

Last week, authorities released a number of suspects from prison, including the alleged mastermind of the Sledgehammer plot, retired army general Cetin Dogan.

But in a bizarre twist, just days later, prosecutors reissued an arrest warrant for Dogan and at least three of his alleged co-conspirators.

"This re-arrest warrant is against legal procedures," said Dogan's lawyer, Celal Ulgen, in a telephone interview with CNN.

Ulgen said his client had not yet been taken back into custody because he is currently being treated at a military hospital for a hernia.