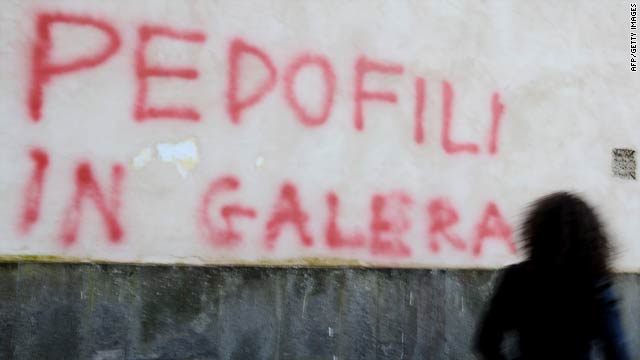 A woman walks past graffiti reading "Pedophiles go to jail" on a wall of the Church of St. Eutizio in Soriano, Italy, on Easter Monday.
STORY HIGHLIGHTS

(CNN) -- As allegations of sexual abuse by Catholic priests started piling up in the Netherlands earlier this year, Bert Smeets, a 58-year-old Dutch musician, decided to launch an organization to bring victims of church abuse together.

Two months later, Smeets' group -- called Mea Culpa -- has received 700 calls and e-mails from people across the Netherlands who, like him, say they were abused by priests as children.

In Germany, where hundreds of church sexual abuse allegations have surfaced since January -- church-abuse victim Norbert Denef started his own victims' group late last month. Called Network B, the organization has been contacted by hundreds of alleged victims of priest abuse in its first few weeks of existence.

In a half dozen countries across Europe, new victims' groups are springing up in response to an unprecedented wave of sex abuse allegations aimed at the Catholic Church. Though such groups have been active in the United States for more than a decade, they are just now forming in Germany, the Netherlands, Austria, Italy and elsewhere in Europe.

"For years we'd been hearing from victims in Europe who were feeling isolated," said Barbara Doris, outreach director for the U.S. group Survivors' Network of those Abused by Priests (SNAP). "Then all of a sudden, the scandal was breaking in Germany and Austria, and we started getting calls asking if we could help get support groups going there."

In late March, Doris and other SNAP officials traveled across Europe to establish new SNAP chapters and to coordinate with new victims' groups in Austria, Belgium, England, Germany, and the Netherlands.

"Helping other survivors meet face to face is the most helpful thing we can do," Doris said. "Once somebody says they've been abused, other survivors feel like they have permission to tell. Then the dam is broken, and people begin reporting abuse."

When the abuse scandal broke in Boston, Massachusetts in 2002, victims groups like SNAP played a key role in getting other survivors to come forward, which turned the scandal into a national ordeal that has cost the U.S. church $2.5 billion in legal settlements.

Before the scandal broke in Boston, SNAP had a few hundred members. Today, it has 9,000.

"After 2002, SNAP became the go-to resource for news media looking to tell the story from what they considered to be the victims' perspective," said John Allen, CNN's Vatican analyst. "Without SNAP, the arc of the story would have been very different."

Like SNAP, many of Europe's new victims' groups want to pressure the church to make reforms in dealing with abuse allegations -- and to pressure the government officials to launch investigations of church abuse -- in addition to providing a support network for victims who are stepping forward after decades of silence.

"We want to have a European commission investigate church abuse because this is a worldwide problem," said Smeets, who alleges that he was abused by a priest at a Dutch boarding school in the early 1960s. "We want to find out the truth."

Helping other survivors meet face to face is the most helpful thing we can do
--Barbara Doris, Survivors' Network of those Abused by Priests
RELATED TOPICS

In Ireland, where news of the church abuse scandal broke a decade ago, victims' groups helped pressure the government to conduct inquires that concluded the church covered up widespread abuse for decades.

"The government and the church did everything in their power to prevent us from exposing anything," said John Kelly, who founded the Irish group Survivors of Child Abuse in 1999. "But we got an inquiry here, and it's led to questions being raised about the pope itself. It's become a world scandal."

In recent weeks the Vatican has pushed back against charges that Pope Benedict XVI ignored allegations of abuse against priests when he was archbishop of Munich, Germany, and when he led the Vatican's Congregation for the Doctrine of the Faith.

Over the course of the same few weeks, Kelly has begun fielding questions from victims' groups getting off the ground elsewhere in Europe. "They're asking how we organized in Ireland and we're advising them on getting the press involved, on litigation and other things."

It's too early to tell if such groups will be as influential as Survivors of Child Abuse in Ireland or SNAP in the United States.

"The challenge will be for these groups to survive the crisis that gave birth to them," said Allen, who is also senior correspondent for the National Catholic Reporter. "In the next six months, you'll see a lot of new groups in Europe. The question is whether they'll still be around five or ten years down the line."