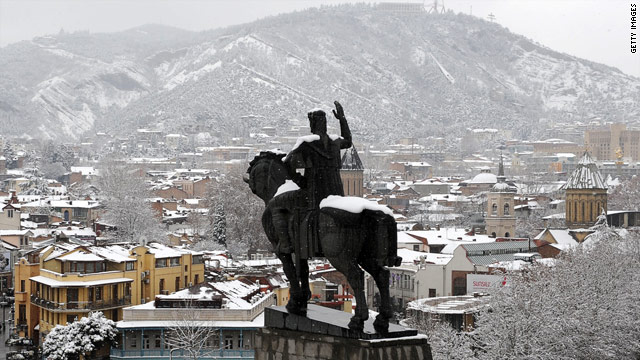 (CNN) -- Georgia forms part of the gateway between Europe and Central Asia, bordered by Russia to the north and Turkey, Armenia and Azerbaijan to the south.

From the southern edge of the Caucasus mountains to the Black Sea, Georgia's landscape is spectacular and rugged. Its history is ancient and often tumultuous.

Georgia is one of the world's oldest Christian nations. People in the area adopted the faith in the fourth century AD. The region currently occupied by Georgia was a well-beaten path for invading in armies in later centuries -- with Arab, Persian, Turkish and Mongol forces leaving their marks.

Its recent history has also been bloody. Annexed by Russia in the 19th Century, Georgia was part of the Soviet Union until 1991. Its independence was followed by social unrest and a conflict with the breakaway region of Abkhazia that led to the displacement of more than 250,000 people, according to the European Commission.

In 2003, following allegations of vote rigging, the government was ousted by mass protests -- a bloodless coup known as the "Rose Revolution," named for the flowers carried by protestors.

In August 2008, Georgian troops entered the breakaway Russian-speaking region of South Ossetia, after sporadic clashes between ethnic Russians and Georgians.

South Ossetia had declared independence from Georgia in the early 1990s. Georgia's move prompted Russian troops to enter South Ossetia and then push deep into the rest of Georgia.

Since the "Rose Revolution" Georgia has made efforts to fight corruption and introduce economic reform, according to the World Bank. It has hopes of joining NATO but the Alliance has made no commitment on Georgian membership.

While Georgia might not spring to mind as an important wine producer, researchers have found evidence of the world's oldest wine making in the region. Scientists from Pennsylvania's University Museum believe 7,000-year-old pottery jars discovered in what is now Georgia were used to store and age wine -- a true vintage.

Fast forward a few thousand years and according to the ancient Greek legend, Jason took the mythological Golden Fleece from King Aietes in Colchis, which is now part of Georgia.

Georgia has it own alphabet (Mkhedruli) and the country's 4.6 million inhabitants speak various languages, with Georgian the official tongue.

Tensions with Russia and the breakaway regions of Abkhazia and South Ossetia remain high, but Georgia is increasingly looking beyond its immediate neighborhood to attract trade and tourism.