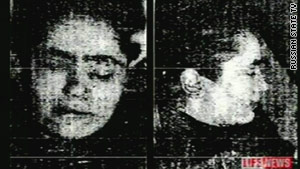 Police released this image of the two women they suspect detonated the bombs on Moscow's metro.
STORY HIGHLIGHTS

Moscow, Russia (CNN) -- Russian police released photographs Tuesday of two women suspected of being the suicide bombers who killed at least 39 people on the Moscow metro a day earlier.

They are hunting for a 30-year-old man from the Northern Caucasus who was seen on security cameras wearing dark clothes and a black baseball cap, and two women, aged 22 and 45, both ethnic Slavs, who allegedly assisted the man, state TV reported.

Investigators believe that the three suspects accompanied the suicide bombers when they entered the metro, the report said.

They also believe Chechen rebels may have been behind the deadly strike, although nobody has claimed responsibility.

Russian President Dmitry Medvedev said Moscow would "restore order by the use of force" in the region, as part of its "quest to eliminate terrorists and bandits" there.

But it was harder to root out corruption and clan structures, and to build an education system, he said in remarks televised by Russian state TV from his country residence.

"Those are the things that are much more difficult to handle. But it is our task and we will be dealing with those issues no matter what," he said.

Meanwhile, the Russian-backed leader of Chechnya wrote in a newspaper article Tuesday that terrorists who target innocent civilians must be "poisoned like rats."

"We have always believed and we continue to believe that terrorists must be hunted down and found in their lairs, they must be poisoned like rats, they must be crushed and destroyed," Ramzan Kadyrov wrote in the Russian daily Izvestia, a day after the deadly rush-hour attacks in two Moscow subway stations.

"The struggle against terrorists must involve the toughest measures and defeating this evil with only persuasion and educational measures is impossible."

Moscow paused to mourn its dead Tuesday, and flags across the city were lowered to half staff as hundreds of thousands of commuters returned to the transit system. Authorities said the attacks killed at least 39 people -- an increase of one since Monday -- and wounded more than 60 others.

Television stations canceled entertainment programming for the day, while some also pulled commercials.

After being closed most of the day, both stations that were bombed reopened around 5 p.m. (9 a.m. ET) Monday, said Veronica Smolskaya, a spokeswoman for the Russian Emergencies Ministry. A heavy security presence was apparent throughout the subway network as police officers were visible on train platforms.

"Our preliminary assessment is that this act of terror was committed by a terrorist group from the North Caucasus region," said Alexander Bortnikov of the Federal Security Service, in reference to the investigation at one of the blast sites.

The current round of the Russia-Chechnya conflict dates back nearly 20 years, with Chechens having laid claim to land in the Caucasus Mountains region. Thousands have been killed and 500,000 Chechen people have been displaced by the fighting.

Chechnya is located in the North Caucasus region of Russia between the Black and Caspian seas.

An estimated 500,000 people were riding trains throughout the capital at the time of the attacks.