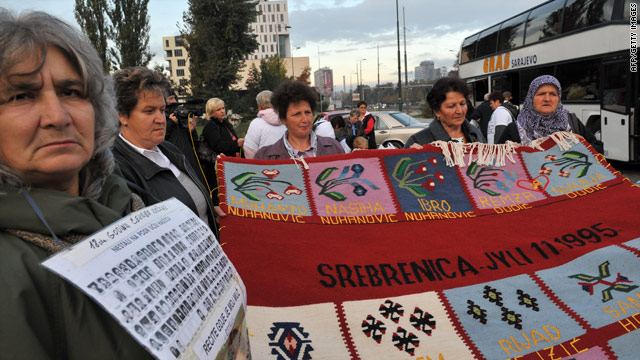 Bosnian Muslim women from Srebrenica hold a hand-woven carpet with the names of their killed relatives embroidered on it.
STORY HIGHLIGHTS
RELATED TOPICS

(CNN) -- The Court of Appeal at The Hague ruled Tuesday that a group of women cannot sue the United Nations for failing to prevent the massacre in the Bosnian town of Srebrenica in 1995.

The court said it was impossible for the Mothers of Srebrenica to sue because of the immunity granted to the United Nations under international conventions. It said the women have other avenues to try to recover their losses.

The mothers are surviving relatives of the men and boys who died in the massacre. They wanted to sue because they believe the Netherlands and the United Nations failed to prevent the killings, the court said Tuesday.

They allege it was the Dutch U.N. peacekeepers who were to blame, the court said.

In making its decision, the court said it tried to balance the U.N. immunity with the interests of the women.

"The Court of Appeal appreciates that the mothers and their relatives have suffered atrocities," the court said. "The Court of Appeal therefore comprehends entirely that they seek redress for their losses in a court of law. It ruled, however, that the interests of the U.N. must prevail in this case."

Lawyers for the women could decide to appeal to the European Court of Human Rights.

More than 7,000 Bosnian Muslim men and boys were killed at Srebrenica when ethnic Serb troops overran a U.N. "safe area" in July 1995. It was the worst European massacre since World War II.

The U.N. War Crimes Tribunal called the five-day slaughter "the triumph of evil."

The men and boys were among thousands of Bosnian Muslims who had sought refuge in the spa town as the Bosnian Serb army marched toward them. They were protected by 100 lightly equipped Dutch peacekeepers who proved no match for the advancing, heavily-armed Serb army.

Serbian TV footage showed women and children being separated from the men and put on buses. In a sickening show of "reassurance," Bosnian Serb commander-in-chief General Ratko Mladic -- now the highest-ranking fugitive being sought by the war crimes tribunal -- told the women everyone would be taken out by bus out and safely reunited.

The United Nations admitted in 1999 that it erred in expecting the 100 Dutch troops to deter the Bosnian Serb army.

The Mothers of Srebrenica describes itself as an association of citizens helping the survivors of the massacre and searching for those missing. It also advocates for getting special status for the town to help with reconstruction and rehabilitation.