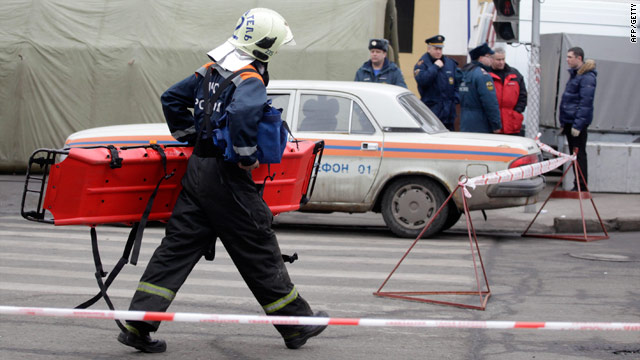 A Russian emergency worker carries a stretcher to the Park Kulturi metro station in Moscow Monday after a suicide attack.
STORY HIGHLIGHTS

London, England (CNN) -- Monday's bomb attacks on the Moscow subway bear the hallmarks of an operation carried out by female Chechen suicide bombers called "Black Widows," according to security analysts.

At least 38 people were killed by twin explosions at the height of the rush hour in what appears to be Chechen separatists' latest salvo in their long-running battle for independence in Russia's northern Caucasus. Russian officials said the blasts were a "terrorist act carried out by female suicide bombers."

Chechens, the majority of whom are Sunni Muslims, regard the region as their ancient homeland, while Moscow fears the creation of an independent Muslim-majority state in its midst and has refused to grant any real autonomy.

The struggle can be traced back to the Stalin era when hundreds of thousands of Chechens were forcibly displaced to Siberia, according to Bob Ayers, a retired international security analyst.

Video: Why Moscow? Why now?

"When they returned they wanted to reestablish their presence in Chechnya and they saw it as their homeland," said Ayers.

The use of women as suicide bombers or "Black Widows," is one way in which the struggle in Chechnya is different from al Qaeda and more analogous to the military campaign waged by the IRA in Northern Ireland, says Ayers.

"This war is politically motivated, it is not about a religious ideology as in the case of al Qaeda, so everyone participates and it is ultimately irrelevant if you are a man or a woman," said Ayers.

"They are not like al Qaeda who might say women should be hidden away and have no role in attacks."

The "Black Widows" are believed to be made up of women whose husbands, brothers, fathers or other relatives have been killed in the conflict. The women are often dressed head-to-toe in black and wear the so-called "martyr's belt" filled with explosives.

They have beem involved in a number of attacks in Russia and first came to prominence in 2002 when they were part of a group of separatists who threatened to blow up a Moscow theater seized in the middle of a musical.

In the rescue attempt by Russian special forces, 115 hostages and 50 Chechen separatists were killed.

In 2003 two Black Widows were responsible for blasts at a rock concert that killed 14 in Moscow.

Black Widows were also members of the 32-strong group of heavily-armed Chechen rebels who took 1,200 people as hostages in Beslan in 2004. In the ensuing gun battles between the rebels and Russian forces, 334 hostages were killed, many school children. Only one militant survived.

Will Geddes, CEO of International Corporate Protection, said: "Female suicide bombers are a signature of Chechen militants. These are the widows of Chechen fighters who have dedicated themselves to the cause."

The attacks in Moscow are designed to gain maximum publicity said Ayers, who added that the militants were trying to send a message to the Russian government that "we can still strike you in your capital."

Ayers said it would be difficult to find anyone in Chechnya who did not want autonomy and that the Moscow-installed Chechen President Ramzan Kadyrov is deeply unpopular.

"He has been installed as an extension of Moscow, an imposed leader, he is not an elected representative," said Ayers.

According to Amnesty International, "The authorities in Chechnya have continued to intimidate and persecute human rights defenders and those who seek justice for abuses. Several have been forced to leave the country due to threats to their lives."