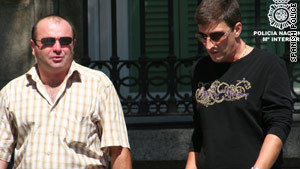 Madrid, Spain (CNN) -- Police across Europe arrested 69 suspected members of a Georgian-run mafia, including 24 in Spain, which was leading the investigation, a National Court spokeswoman told CNN Monday.

Other arrests were in Germany, Austria and Switzerland, whose prosecutors worked with their Spanish counterparts on the case. There were also a few arrests in France and Italy, said the spokeswoman, who by custom is not identified.

The suspects, wanted for drug trafficking, extortion and money laundering, and in a few cases for murder plots, were thought to have operated at a level close to the street, controlling local mafia networks, she said -- they are not thought to be high-style mafia kingpins living in mansions and surrounded by luxuries.

Some Spanish media reported the suspects were linked to a Russian mafia, but the court spokeswoman said investigators had told her it was Georgian-run.

In Spain, the national police worked with regional police in Catalonia and the Basque region to make the arrests, mainly in the Barcelona and Valencia areas, she said.

There has long been speculation that mafias were involved in money laundering through Spain's housing and real estate bubble along the Mediterranean coast, where second homes were built for vacationers from Spain and northern Europe.

Tens of thousands of these homes remain unsold or unfinished in the economic downturn.

Numerous local Spanish politicians have been arrested on suspicion of accepting bribes or kickbacks to permit rampant construction that far exceeded demand.