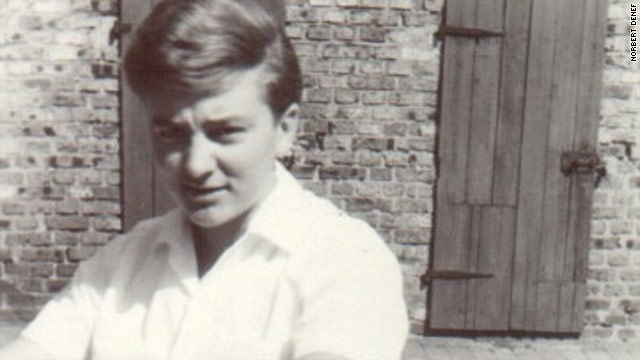 Norbert Denef at the age of 16. He says he was first abused at the age of 10 after becoming an alter boy at his local church.
STORY HIGHLIGHTS
RELATED TOPICS

SCHARBEUTZ, Germany (CNN) -- Norbert Denef says for years he couldn't speak about the crimes committed against him during his childhood in Germany.

He grew up, got married and became a father, but never managed to tell his family what was lingering inside him and about the pain that was eating him up. He became depressed, thought about killing himself -- and then realized he had to speak or die.

One morning he stood in front of his mirror and wanted to say it. He remembers uttering a simple, "I ... I ... I ..." But he says his lips were shivering so hard he couldn't go on. He stood there for several minutes, crying, until his tortured past burst forth:

"I was sexually abused!"

Denef, now 60, says this was the moment he realized the words he had so dreaded to say, the thoughts he had tried to suppress for more than three decades, would now become his greatest weapons.

Is the Catholic Church doing enough to investigate abuse claims?

Denef vowed he would never be silenced again. And now, as cases of child abuse in Catholic institutions continue to come to light, he is telling his story.

"I was 10 years old the first time it happened," he said in an interview with CNN. "I had just become the alter boy at our church and was proud to be part of the group. Then one day the vicar (asked) to see me in his apartment alone."

Denef shakes and moves from side to side as he recounts the first time he says he was abused by the local priest in his hometown of Delitsch in eastern Germany.

"He pulled me on his lap, opened my pants and started touching me."

The abuse went on for five years, he says, and it didn't end when that priest was sent to a different congregation. Denef says after the priest in question left, another employee of the church forced him to perform sexual favors for another three years until he turned 18.

Denef is one of the few victims of church abuse speaking out publicly even as well over a hundred cases of child abuse in Catholic institutions in Germany have come to light over the past two months.

The first cases were reported at the Canisius Kolleg, a private Jesuit school in Berlin. Since then a tidal wave of abuse allegations has rocked Germany and embarrassed the country's Catholic leadership in the homeland of Pope Benedict the XVI.

Last week a Benedictine abbey in Ettal in Bavaria was raided by police after more than a dozen former pupils alleged they had been abused at the institution. The abbey has since hired Thomas Pfister, a special investigator who presented an interim report that laid out widespread beating and sexual abuse.

"Children that were enrolled in the abbey were massively abused for decades sexually, physically as well as psychologically," Pfister said at a press conference, in which he added that one of the priests had posted pictures of half-naked pupils on a gay Web site.

The investigator's summary was blunt:

"It is is totally clear that the crimes committed here could not have happened if it had not been for ill-guided solidarity on the part of other members of the abbey," he wrote.

Another case involves the renowned Catholic boys choir, "Regensburger Domspatzen," with several alleged cases of abuse having been made public. The abuses allegedly were committed in the 1960s, shortly before the pope's brother, Georg Ratzinger, became the musical director at the choir.

In a newspaper interview Ratzinger apologized to the victims and said he knew nothing of any sexual abuse going on. However, Ratzinger admitted he, too, slapped children as discipline. "I did have a very bad conscience doing it, though," Ratzinger said in the interview.

Germany's Catholic church is under fire from former abuse victims and politicians, and has said it will revise the guidelines for dealing with cases of sexual abuse.

"I apologize in the name of the church in Germany to all those who became victims of such crimes," Robert Zollitsch, the archbishop of Freiburg and highest-ranking Catholic in Germany, said recently.

Some have accused the Vatican of trying to cover up the scandal in the homeland of the pope.

On Tuesday the pope's spokesperson issued a rebuttal.

But the child sex abuse scandal in Germany is not limited to church institutions. Last week dozens of alleged cases became known at a prominent boarding school in the state of Hesse.

Most of the abuse cases now coming to light in Germany happened from the 1960s in to the 1980s and the years since have exceeded the German statute of limitations for prosecution on crimes such as child rape.

Pfister, the special investigator in the Ettal case, made that point at a recent press conference.

"By regular standards each of the perpetrators would have been sentenced to jail terms of several years (if cases had been prosecuted within the statute of limitations)," Pfister said.

Heinz Juergen Overfeld is fighting to have the statute of limitations removed from child-abuse laws in Germany.

Overfeld grew up in a Catholic children's home and says he was abused and raped there for eight years.

"The good thing is you don't feel any pain when it happens. It is like your body is disconnected from your mind," Overfeld said.

Overfeld describes situations in which priests would place him and other children in solitary confinement if they did not behave. He claims he was given drugs that subdued him while priests beat and raped him.

Overfeld is now the deputy head of an organization that represents victims of sexual abuse in church and government-run children's homes.

Originally the church wrote a provision into the document that stated Denef must never speak about the abuses he suffered or he would have to pay back the money. Denef refused, and the provision was removed.

Denef vows he will not be silenced again.

At the end of the interview he had a word of warning. Abuse runs much deeper than just church institutions, he said.

"Germany must face up to this national tragedy," Denef said. "It is too late for me, but we must make sure this doesn't happen to children in the future."

Watch Connect The World tonight at 2100 GMT to see the full story.